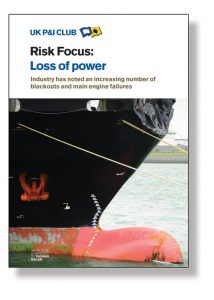 The Club reveals that main engine failures or electrical blackouts now amount to 7% of its third party claims property damage in US$ terms. Many were enormously expensive and in some cases amounted to millions of dollars. Ships effectively out of control as a result of these problems have caused extensive damage to berths, locks, bridges, navigational marks, loading arms, cranes and gantries as well as moored ships. Costly collision and grounding claims can similarly be caused by these failures.

Concern about these rising claims prompted the Club to initiate a data collection exercise by the UK Club’s risk assessors and a detailed analysis of more than 700 claims.  The resulting title “Risk Focus: Loss of Power” is the third review born from the Club’s innovative “Bowtie” risk management system to be published.

It is no exaggeration to suggest that main engine failures and blackouts tend to occur most regularly at the point in a voyage where the ship is at its most vulnerable. In confined waters or entering and leaving port, the stable loads, which will generally prevail with the ship on passage, are disturbed. There is additionally some evidence that compliance with the low sulphur fuel regulations and changing from one grade of fuel to another may have exacerbated these problems.

Reports from pilots, operating in emission control areas where fuel grade changes have been implemented, indicate that these problems have become quite widespread, noting that ships regularly seem to be experiencing power losses, invariably at critical times in their manoeuvres and which are attributed to ‘fuel problems’. In the Club’s recent Loss Prevention Bulletin 785-09/11(fuel switching), the Club alerted its Members to warnings from the US Coast Guard, which had just enforced its own Emission Control Area (ECA) sulphur limits, noting a marked increase in incidents after vessels lost propulsion. The USCG has linked many of these incidents to vessels operating on marine distillate fuels.

The Club states that the vulnerability of ships to third party property claims has also tended to increase as a result of the ‘self-sufficiency’ of modern vessels, the provision of lateral thrusters tending to persuade operators to minimise their dependence upon tug assistance in port waters. Thus, where in an earlier era a vessel experiencing mechanical difficulties would be merely held safely in position by assisting tugs, a single tug in attendance may not be able to intervene sufficiently with a large ship suffering a blackout or main engine failure at a critical point in the manoeuvres.

The consequences of main engine failures or blackouts can be little short of disastrous, in terms of the enormous third party property damage claims which can result. An entire canal system or waterway could be put out of action as a result of an out of control ship damaging a lock or bridge, while months of expensive inactivity could be suffered should a specialist berth with bulk loaders or gantries be damaged by a ship. The costs of ships rendered inactive as a result of third party damage can be substantial as can all claims from collisions and groundings attributable to such causes.

The Club’s analysis of more than 700 claims provides ample evidence that these problems are not merely anecdotal, as the graphical presentation of large third party property claims contained in the bulletin illustrates. Engine failures, steering failures, failure of bow thruster or blackouts (which may well be connected) amounts to around 7% of the whole.

Evidence has been provided by a twelve month exercise by the Club’s in-house assessors employing a questionnaire during their routine ship visits, which was designed to identify and highlight problems experienced aboard the Club’s entered vessels. Altogether, 249 ships’ crews were questioned during this investigation about their experience with blackouts, main engine failures and fuel switching problems.

The Club urges better communication between deck officers and engineers. Around three quarters of all chief engineers questioned reported blackouts caused by starting bow thrusters and deck machinery such as mooring winches or cranes with insufficient electrical power being available. It is clearly not always realised that the starting current of electrical motors can be several times the full ‘on load’ current and starting large motors can sometimes cause circuit breakers to trip and lead to blackouts. While many modern ships have in-built safety features to prevent this happening, it is still a sensible precaution to have routines in place to ensure that adequate generating power is available before starting large electrical motors.

Engineers also need to warn the bridge of depleted air bottles. Excessive numbers of engine starts/stops during manoeuvring will deplete pressure in the main engine start tanks which can result in loss of control of the vessel at critical times, such as when docking, due to the engine failing to start.  Since sudden loss of power is essentially a matter for the engineers to deal with, many of the UK Club’s recommendations are directed towards the engineroom team.

A shortage of fuel supply to the generating engines accounted for 64 (16%) of reported blackouts, with a high proportion of these attributed to blocked fuel filters. Engineers need to be more thorough when cleaning filters and be aware that if a vessel changes over from higher sulphur fuel (HFO), when marine gas oil is introduced into the system it may act like a solvent, releasing any asphaltenes which then collect in the fuel filters/strainers and clog them.

As the Club says, an extending network of ECAs around the world may well see the problems multiplying for those aboard ship. For example, it was reported that 60% of ships took up to 12 hours to change the main engine over from one type of fuel to another.

Of course the old favourite ‘human error’ has its part to play, featuring in 11% of main engine manoeuvring failures. Frequently it is as simple as “I pressed the wrong button” but it’s hard to get that information out of any ship’s officer!

The UK Club’s innovative risk management scheme utilises a Bowtie approach to identify the various threats to the smooth, i.e. claim-free, running of their Members’ ships.   By application of this concept to ships, the Club has identified seven primary risk hazards; 76 common threats, which if not contained could cause an incident; and 450 controls which need to be in place and effective if the threats are to be contained.

The Club has applied its Bowtie methodology, which identifies ‘threats’ to safe operation, to this loss of power issue. The Risk Focus booklet details the consequences and controls and sets out areas of risk and minimising the occurrence of incidents.   A full Bowtie chart with all the threats can be provided on request.

The UK Club works with its Member shipowners and technical managers to identify, conducting reviews onboard to identify those areas which may cause claims.  The managers of the UK Club, Thomas Miller, have access to an incomparable amount of claims data drawn from extensive analysis of previous incidents over more than 20 years.  This has enabled the Club to identify ‘threats’, ‘consequences’ and ‘controls’, the foundations of developing Bowtie reports on individual vessels.

Thomas Miller The Thomas Miller Group manages a number of world-leading mutual insurance organisations or “clubs, ” providing insurance for shipping, transport and professional indemnity risks; and captive insurance companies in the Isle of Man and Bermuda. Thomas Miller provides risk management consultancy services and, through its regulated specialist subsidiaries, delivers a full investment management service to mutual clubs, captives and other clients. The firm incorporated in 1999 and is owned and controlled by its 550 employees worldwide