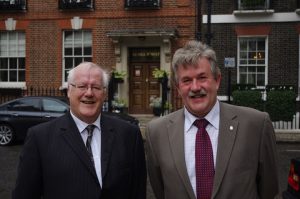 The International Bunker Industry Association (IBIA) has appointed Captain Cliff Brand as its new ChiefExecutive.  A former head of the Gibraltar Maritime Administration, Cliff Brand’s 27 year career in the shipping industry has encompassed a wide range of roles including twelve years at sea, accident investigator and harbour master.

Taking up his new appointment on 24 October 2012, Cliff Brand will be replacing IBIA board member and maritime arbitrator Trevor Harrison who took on the part-time role of Acting Chief Executive on an interim basis after the resignation of its previous Chief Executive last year.

Welcoming Cliff Brand’s appointment IBIA Chairman Nigel Draffin said: “Cliff Brand brings a huge range of experience to IBIA and will be instrumental in developing and servicing a membership which represents all sectors of the marine fuel business. We are delighted to have him aboard. IBIA is extremely grateful to Trevor Harrison for his hard work and dedication as interim chief executive over the past year. ”

Cliff Brand said: “Representing interests from across the entire marine fuels industry at the highest level is a hugely exciting challenge. With new legislation driving so many fundamental changes, there are many challenges ahead for the bunker industry. I look forward to making contact with members and developing the association. ”

Following 12 years in the Merchant Navy (1985-1997), mainly as Master on board AHTS vessels and a period ashore in ship superintendence, Cliff Brand joined the UK’s Marine Accident Investigation Branch as an Accident Investigator. During his time there (1997-2004), he obtained a BSc Honours Degree in Shipping Operations, as well as Diploma in Marine Surveying.

In 2004 he took up the post of Maritime Administrator for the Government of Gibraltar, where he was head of the Gibraltar Maritime Administration. During his tenure he was directly responsible for substantial growth of registered tonnage on the Gibraltar Ship Register as well as Paris MOU “White List” status recognition. He was also actively involved with the IMO. He was Chief Executive of the Gibraltar Port Authority between 2006 and 2008 where in addition to port business he was involved extensively in the salvage of a high profile marine casualty.

Harwich Haven Authority. He obtained an MBA in shipping and logistics and in 2012 he joined Eagle Lyon Pope as a Marine Consultant.

IBIA exists to provide an international forum to address the concerns of all sectors of the international bunker industry; to represent the industry in discussions and negotiations with national and international policy makers, legislators and other groups and bodies; to review, clarify, improve, develop and endorse where appropriate, industry methods, practices and documentation; to increase the professional understanding and competence of all who work in the industry; to provide services and facilities for members and others.

IBIA actively seeks to involve its members through its Annual Convention by educating and motivating members to concur on major issues and topics of the time, creating the “IBIA Position” to present to IMO.