HIGHLIGHTS OF THE REVIEW PERIOD JANUARY-SEPTEMBER 2012

BJÖRN ROSENGREN, PRESIDENT AND CEO:   “Despite the continuing uncertainty in the global economy and the tough market conditions, both our order intake and net sales developed well. In the third quarter they were up by 14% and 28% respectively. Ship Power’s year-on-year performance is strong, and has been supported by both an active offshore sector and the Hamworthy acquisition. Among the highlights are a major engine and propulsion equipment order for six Brazilian drillships from Jurong Shipyard Pte Ltd, and three platform supply vessel related orders from Statoil, as well as the first four ballast water management system orders. Wärtsilä again received a record power plant order, this time for an approximately 600 MW power plant to be constructed in Jordan. It will be the world’s largest tri-fuel power plant. I am also happy to note that the growth trend for Services continues, regardless of the difficult market environment that many of our marine service customers are experiencing.

We believe that net sales will grow this year by around 10-15%, which is more than originally estimated. Our profitability now stands at 10.3% and we believe it will improve in the fourth quarter. As a result, we expect profitability for the full year to be 10.5-11%.” 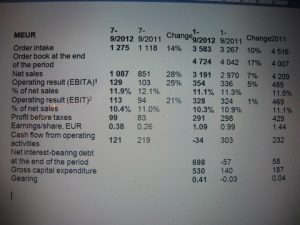 The power generation market is expected to remain active during the remainder of 2012. Ordering activity continues to be focused on emerging markets, which continue to invest in new power generation capacity. In the OECD countries, there is still pent-up power sector demand, mainly driven by CO2 neutral generation and the ramp down of older, mainly coal-based generation. Despite the continuing interest for new power generation investments, the macro economic uncertainty may delay investment decisions.   Robust contracting activity, in line with the activity levels seen during 2011 and so far in 2012, is expected for the offshore, gas carrier, and other specialised vessel markets. The outlook for overall vessel contracting activity during 2012 is slightly negative, with full year contracting expected to be less than during 2011. The decrease is largely driven by the low contracting levels in the traditional merchant segments. Interesting opportunities are being seen in the following areas: efficiency improvement, gas as a fuel, and environmental solutions. These are now central issues in many newbuilding discussions and are expected to grow in importance going forward.   The outlook for the overall service market is stable despite the continued uncertainty in the global economy.The outlook for service activities in the merchant segment remains challenging, while the outlook for offshore remains promising. Activity in the other marine markets is expected to be stable. Market conditions for power plants related services are expected to remain on a good level.

Wärtsilä Corporation follows the disclosure procedure enabled by Standard 5.2b published by the Finnish Financial Supervision Authority. This stock exchange release is a summary of Wärtsilä Corporation’s Interim Report January-September 2012. The complete report is attached to this release in pdf format and is also available on Wärtsilä’s website at www.wartsila.com/investors.

An analyst and press conference will be held on, Wednesday 17 October 2012, at 10.00 a.m. Finnish time (8.00 a.m. UK time), at the Wärtsilä headquarters in Helsinki, Finland. The combined web- and teleconference will be held in English and can be viewed on the internet at the following address: http://storm.zoomvisionmamato.com/player/wartsila/objects/gftabmj8/.

To participate in the teleconference please register at the following address: http://www.yourconferencecentre.com/r.aspx?p=1&a=DKXaEsCAWnEelu.   You will receive dial-in details by e-mail once you have registered. If you want to ask questions during the teleconference, press the *-button followed by the 1-button on your phone to register for a question and the # -key to withdraw a question. The event name is: Q3 Results 2012. Please be ready to state your details and the name of the conference to the operator. If problems occur, please press the *-button followed by the 0-button.   An on-demand version of the webcast will be available on the company website later the same day.   For further information, please contact:   Raimo Lind Executive Vice President & CFO Tel: +358 10 709 5640 raimo.lind@wartsila.com   Pauliina Tennilä Director, Investor Relations Tel: +358 40 570 5530 pauliina.tennila@wartsila.com

Wärtsilä is a global leader in complete lifecycle power solutions for the marine and energy markets. By emphasising technological innovation and total efficiency, Wärtsilä maximises the environmental and economic performance of the vessels and power plants of its customers. In 2011, Wärtsilä’s net sales totalled EUR 4.2 billion with approximately 18, 000 employees. The company has operations in nearly 170 locations in 70 countries around the world. Wärtsilä is listed on the NASDAQ OMX Helsinki, Finland.

The third quarter EBITA figure as well as the comparison figure is incorrectly reported in the interim report. The correct figure is EUR 122 million (99) or 11.2% of net sales (11.6). The intangible asset amortisation related to acquisitions was EUR 8 million during the third quarter (5).