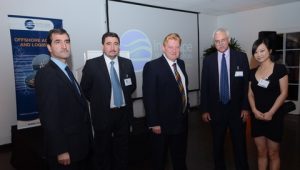 Inchcape Shipping Services (ISS) the world’s leading maritime services provider, has celebrated the tenth anniversary of its operation, ISS Brazil, with a special event for customers and staff as business continues to expand.

Employees attending the anniversary event with customers included the ISS Brazil team, regional management and Claus Hyldager, Chief Executive Officer of ISS. In a speech to mark the event, Claus Hyldager congratulated ISS Brazil on the growth and success of the business and ten years of loyal service by nine original team members.

He said: “Brazil is now a leading economy and ISS’ expansion shows our commitment to the country. Despite the current pressure on global markets, Brazil’s economy continues to thrive and recent developments include the growth of the oil and gas sector which has boosted industry across shipping, as well as the ongoing countrywide investment in dredging, port infrastructure, highways, bridges, power plants and dams, all of which rely on seagoing vessels and river barges.    “Looking ahead, Brazil is set for further widespread growth with its hosting of two world sporting events – The FIFA World Cup in 2014 and the next Olympic games in 2016 – which will continue to require ongoing investment in its infrastructure.  This truly is an exciting time for ISS Brazil as we move into a new decade of operations.”

Inchcape Shipping Services is the world’s leading maritime services provider. With over 290 proprietary offices in 67 countries, and a workforce of over 3, 700, the company’s diverse global customer base now includes owners and charterers in the oil, cruise, container and bulk commodity sectors as well as naval, government and inter-governmental organisations.

Issue 5 of “Insight” looks at the global implications of urbanisation

Economy continues to thrive and recent developments include the growth of the oil and gas sector which has boosted industry across shipping,

We are working on national/foreign flagships at Bangladesh ports with the entire satisfaction of our principal according to their requirements / instructions.

It has been observed that time-to-time many ships of North- and South America, Europe, Africa, Middle East and Asian ship owners / managers calling at Chittagong / Mongla ports.

We have no any business friend / firm to covering the North- and South America, Europe, Africa, Middle East and Asia.

So, we are unable to develop our business in North- and Centre Europe, South Europe and North Africa, North- and South America, Middle East and Asian countries.

As such we are looking a suitable business friend / firm for doing the above mentioned business through your kind assistance for mutual interest. (If you are agreed).

In view of above, we would like to joint your worldwide network coverage for act as a One-Stop center for ship requirements and services.

We are constantly aware of our clients’ greatest concern – to save time and cost. That is why we can count on a swift response on all your inquiries. We aim to deliver your requirements fast and efficiently.

If you are interested for doing the business with us please advice your full terms and conditions by return.

Your valued reply would be highly appreciated.

Looking forward to yours.