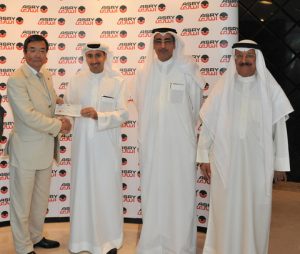 The Kingdom of Bahrain has hosted the 2012 IMO World Maritime Day Parallel Event, on 17 and 18 October 2012, with a seminar and other activities, focusing on this year’s World Maritime Day theme:  “IMO: One hundred years after the Titanic”.

The parallel event, regarded by all who attended as a great success, was the first to be held in the region.

On Wednesday, 17 October, the World Maritime Day Parallel Event seminar was held under the patronage of His Excellency Kamal bin Ahmed Mohammed, Minister of Transportation, and organized by the Ministry of Transportation (Ports and Maritime Affairs), in coordination with IMO. The seminar, attended by IMO Secretary-General Mr. Koji Sekimizu, representatives from IMO Member States, maritime industry professionals and local shipping industry representatives, highlighted the improvements made over the past 100 years in promoting the safety of life at sea.   In his keynote address, His Excellency Kamal bin Ahmed Mohammed thanked IMO for selecting the Kingdom of Bahrain to host this year’s World Maritime Day Parallel Event. He reflected on how the Titanic had served as a wake-up call to maritime nations, in terms of the importance of adopting international treaties and standards on safety at sea and following through with their application and enforcement.

IMO Secretary-General Sekimizu acknowledged Bahrain’s long-standing seafaring and maritime history. This year’s World Maritime Day theme had provided an opportunity not only to reflect on how much things have improved since the Titanic sinking in 1912 but also on how this has helped in reinforcing IMO’s commitment to preventing such incidents from reoccurring, he said.   Mr. Sekimizu also highlighted IMO’s role in proactively addressing today’s pressing safety and environmental concerns, and in promoting the use of the latest technologies.

During his visit to Bahrain, IMO Secretary-General Sekimizu also held a series of meetings with His Royal Highness Prince Khalifa bin Salman bin Hamad Al Khalifa, Prime Minister of the Kingdom of Bahrain; His Royal Highness Prince Salmanazars bin Hamad Isa Al Khalifa, Crown Prince of Bahrain; and His Excellency Kamal bin Ahmed Mohammed, Minister of Transportation, regarding co-operation between the Government of Bahrain and IMO in general.

On Thursday 18 October, the Secretary-General and other international delegates were taken on site visits to key maritime locations including the state-of-the-art Khalifa Bin Salman Port and its vessel traffic services (VTS) Centre, the Seafarers’ Centre and the Arab Shipbuilding and Repair Yard (ASRY).   At ASRY Headquarters, Mr. Sekimizu received a cheque for US$50, 000, as a contribution from ASRY to IMO’s maritime security activities.  The cheque was presented by Daij Bin Salman Al Khalifa, Chairman of ASRY, in the presence of Hassan Ali AlMajed, Chief of the Port and Maritime Authority, Ministry of Transportation. It was requested that the fund should be used for IMO’s projects addressing piracy off the coast of Somalia and in the Indian Ocean.

Mr. Sekimizu expressed his deep appreciation for the donation made by ASRY, particularly in view of the current difficult financial situation in the shipping, shipbuilding and ship repairing industries. He confirmed the donated funds would be used for the capacity-building projects under the Code of Conduct concerning the Repression of Piracy and Armed Robbery against Ships in the Western Indian Ocean and the Gulf of Aden (the Djibouti Code of Conduct).

Mr. Sekimizu expressed his hope that IMO would receive further contributions, not only from the maritime industries but also from industries other than shipping and shipbuilding, to reflect the fact that the world economy as a whole benefits from the seamless and reliable international maritime transportation system provided by shipping, at a very low cost. He stated that the protection of shipping lanes is vital for the world economy as a whole, and that all industries should be aware of the current situation with regard to piracy and should contribute to IMO efforts to combat it. Of even greater importance, he said, is the need to protect hundreds of thousands of seafarers who navigate piracy infested waters as part of their daily working lives.

___               IMO – the International Maritime Organization – is the United Nations specialized agency with responsibility for the safety and security of shipping and the prevention of marine pollution by ships.