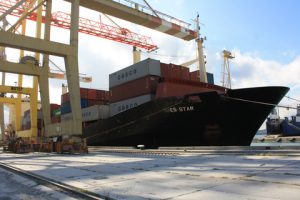 “X-Press has added the 1139TEU CS Star to its Black Sea service that now includes Novorossiysk. She is seen here working containers at the NUTEP terminal.”

The Global Container Service Group (GCS) has added new feeder and short-sea links to the list of services calling at the NUTEP terminal in Novorossiysk. Both GCS and NUTEP are members of the Delo Group.

X-Press Feeders has launched the BSX service to Novorossiysk, Odessa and other Black Sea ports by adding a vessel to Evergreen’s Black Sea feeder (BSF). Originally it was operated by Evergreen with a single ship, the 1578TEU Calisto, on a rotation:

When X-Press joined forces with Evergreen last month (September) it added a second ship, the 1139TEU CS Star, and the port rotation was extended to Novorossiysk:

A shortsea company, Admiral Container Lines, is already a good NUTEP customer with a regular service having the port rotation:

Now, Admiral is starting a second service, an Istanbul (Marport)/Novorossiysk shuttle, using the 508TEU Corsa. The first sailing is due to take place in late October.

NUTEP recently received its fourth Ship-to-Shore (STS) gantry crane, which will be commissioned early in November. This Liebherr post-Panamax crane will take NUTEP’s capacity up to 400 000TEU/annum. This will in turn assist GCS in its growth plans. GCS provides for lines calling Novorossiysk a variety of support services including land-side logistics, block-train and truck transportation, container depots and customs formalities.

Each year NUTEP is given the task of handling services linked closely to the citrus season. One such service recently announced by CMA CGM is its Citrus Express, a seasonal service to transport citrus exports from Turkey and Egypt to Russia.

As from 2 November 2012, CMA CGM will deploy three 1100TEU vessels on the following loop:

In mid February, at the end of the citrus export campaign in Turkey and at its beginning in Egypt, one new Egyptian port will be included and the loop will be as follows:

“This new service will enable CMA CGM to consolidate its position as a reefer operator in this fast growing market. It underlines an important step of our deployment in this area and confirms CMA CGM’s willingness to strengthen its presence in these countries to cater for both import and export volumes.”

Like CMA CGM, Maersk Line, via the shortsea/feeder specialist Seago Line, will introduce a seasonal feeder link. Seago is an independent entity within the A P Moller – Maersk Group and offers its own regional services in addition to acting as a feeder for Maersk Line.

The service will deploy two 600 TEU ships and the port rotation will be:

In Novorossiysk, Seago vessels will be calling at the NUTEP terminal. The maiden call is scheduled for 14 November

In the near future, the group plans to further expand its existing companies and add new ones in order to match the growing demand for professional transport services in Russia, the CIS and further afield. A strategic target of GCS is to triple the volume of revenue and double its container throughput over the next five years. That will be achieved through consolidation of its vertically-integrated systems for seamless delivery of containers to any destination of Russia and world-wide.  In embracing that challenge GCS firmly relies on its more than 1100 staff and close partnerships with leading Russian and international transport companies.

Ruscon is one of the leading transport operators in the Russian container industry today, being the multimodal branch of GCS. Its experienced team, counting more than 700 people in nine offices throughout Russia and CIS, handles almost 150 000TEU a year.

Greek Shipping pays more tax in cash and kind than any other shipping group in the world!