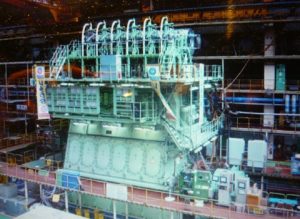 MAN Diesel & Turbo, together with HHI-EMD, the engine and machinery division of Hyundai Heavy Industries, has presented the first IMO Tier III-compliant diesel engine utilising EGR (Exhaust Gas Recirculation). The presentation of the engine took place at HHI-EMD production facilities in Ulsan, South Korea on 9 October 2012 when a group, representing shipyard and ship owners, was invited to an informal presentation of the new engine type – an MAN B&W 6S80ME-C9 with integrated EGR.

The EGR system represents a milestone in Tier III development that enables the engine to meet IMO Tier III NOx regulations, which will be introduced in ECAs (Emission Controlled Areas) from 2016. The new development means that this strict emissions limit can be met without significantly compromising engine performance. In this respect, MAN Diesel & Turbo’s Søren H. Jensen, Vice President and Head of Research & Development, Marine Low-Speed, said: “Testing achieved a low penalty, equivalent to 1-3g/kWh, which is even better than our most optimistic expectations.”

Side profile of the engine

The EGR system was designed, produced and assembled in close cooperation with HHI-EMD, Alfa Laval, Siemens, GEA and Vestas Aircoil. This close cooperation has ultimately resulted in a reliable prototype engine configuration that MAN Diesel & Turbo states will form the basis for its future low-speed diesel programme.

Søren Jensen further stated: “As a promising spin-off benefit, the engine can also run in a fuel-optimised Tier II mode that facilitates an approximate 4 g/kWh fuel-oil consumption reduction at part-load.” As such, MAN Diesel & Turbo reports that this makes the engine even more efficient than today’s high efficiency Tier II engines during transoceanic operation. This favourable result was accomplished through a combination of sequential turbocharging, turbocharger cut-out and low EGR rates.

The engine will be installed in a Maersk Line C-class container vessel, currently under construction at Hyundai’s shipyard. The ship is due for delivery in the first quarter of 2013 and is bound for service between South East Asia and West Africa. The A.P. Moller – Maersk Group and MAN Diesel & Turbo have agreed to operate the engine 20% of the time in IMO Tier III mode, and to otherwise favour the fuel-optimised Tier II mode with low EGR rate. MAN Diesel & Turbo intends to follow the engine’s performance closely over the next three years in order to gain service experience and increase the EGR system’s reliability for future engines. 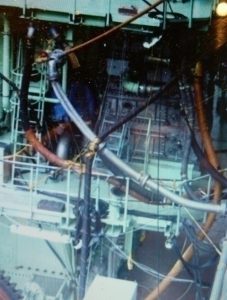 A closer view of the EGR system

MAN Diesel & Turbo SE, based in Augsburg, Germany, is the world’s leading provider of large-bore diesel engines and turbomachinery for marine and stationary applications. It designs two-stroke and four-stroke engines that are manufactured both by the company and by its licensees. The engines have power outputs ranging from 450 kW to 87 MW. MAN Diesel & Turbo also designs and manufactures gas turbines of up to 50 MW, steam turbines of up to 150 MW and compressors with volume flows of up to 1.5 million m³/h and pressures of up to 1, 000 bar. The product range is rounded off by turbochargers, CP propellers, gas engines and chemical reactors. MAN Diesel & Turbo’s range of goods includes complete marine propulsion systems, turbomachinery units for the oil & gas as well as the process industries and turnkey power plants. Customers receive worldwide after-sales services marketed under the MAN PrimeServ brand. The company employs around 14, 000 staff at more than 100 international sites, primarily in Germany, Denmark, France, Switzerland, the Czech Republic, India and China. MAN Diesel & Turbo is a company of the Power Engineering business area of MAN SE.-