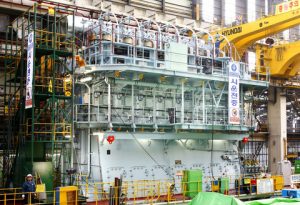 This important milestone was passed in August with the placing of an order for a 7-cylinder Wärtsilä RT-flex82T version B main engine. This engine will power an efficient Very Large Crude Carrier (VLCC) tanker being built for JX Tanker Company Limited, the Yokohama, Japan based major tanker company. The 310.000 DWT vessel is being built at the IHI Marine United Inc., Kure shipyard, and is scheduled for delivery in 2014. The engine will be manufactured by Diesel United, Ltd. (DU), a Wärtsilä licensee in Japan.

The newly upgraded Wärtsilä RT-flex82T version B engine is based on the very popular RT-flex82T, which has accumulated more than 100 reference installations, and is the perfect choice for VLCC vessels that need an efficient, simple, reliable and safe machinery solution. The high stroke-to-bore ratio along with the RT-flex common-rail system in Wärtsilä two-stroke engines, provide superior performance. The highest flexibility of engine tuning possibilities makes it possible to achieve the lowest fuel oil consumption in all operational conditions for VLCCs.

The first Wärtsilä RT-flex common-rail 2-stroke engine entered into service in 2001. The fact that 1000 of these engines have been ordered in just eleven years, despite the post 2008 slump in the shipping sector, indicates that Wärtsilä is the preferred choice for electronically controlled engines, which are now the leading propulsion machinery option for merchant ships.

“This latest order is significant for Wärtsilä for two reasons; it takes us past the 1000th order milestone for electronically controlled engines with good environmental performance, and is also the first order for the upgraded RT-flex82T version B engine for a next generation eco type of VLCC. For both reasons, we are extremely proud and happy, ” says Martin Wernli, President, Wärtsilä Switzerland and Vice President, Wärtsilä Ship Power, 2-stroke. “The huge success of the Wärtsilä 2-stroke, low-speed diesel engines is very much due to the fact that they are the only common rail engines on the market that can offer exceptional fuel savings across the entire load range. This is especially the case for eco type new vessel designs, such as the IHI Marine United developed next generation VLCC as ordered for the JX Tanker Company. The RT-flex82T version B engine is the best choice in the market for optimizing fuel efficiency.”

Thanks to the common-rail system, the optimum injection pressure, fuel injection timing and exhaust valve timing are selected at all engine loads or speeds, ensuring efficient combustion at all times, full-load or part-load.

Other advantages of this technology include stable low running speeds (in the range of 10-12% nominal speed), smokeless operation, and improved control of exhaust emissions. For cylinder lubrication, an oil feed rate of 0.6 g/kWh can be achieved.

The common-rail system provides excellent balance in the engine power developed between cylinders and between cycles, with precise injection timing and equalised thermal loads. This offers notable benefits to ship owners and operators as this leads to extended intervals between overhauls, and hence a reduction in maintenance costs. The superior technology of Wärtsilä’s electronically controlled engines enable customers to better perform in the changing market conditions and to meet the requirements of increasingly stringent environmental legislation.

Wärtsilä is a global leader in complete lifecycle power solutions for the marine and energy markets. By emphasising technological innovation and total efficiency, Wärtsilä maximises the environmental and economic performance of the vessels and power plants of its customers. In 2011, Wärtsilä’s net sales totalled EUR 4.2 billion with approximately 18, 000 employees. The company has operations in nearly 170 locations in 70 countries around the world. Wärtsilä is listed on the NASDAQ OMX Helsinki, Finland.