The problems of reconciling arbitration settlements, reached under the rules of the 1958 New York Convention, with claims made by other interested parties in European national courts and under Brussels regulations were aired at a London Shipping Law Centre seminar on November 1st – last night! John Faraclas finally made it with his camera..:

The New York Convention, to which 146 states are signatories, has provided a very widely accepted framework for arbitration. When the Suezmax tanker Front Comor collided with a jetty in Sicily in 2000, owners West Tankers, who had chartered the vessel to an Italian oil company, proceeded to arbitration in London, as provided under the contract agreement. 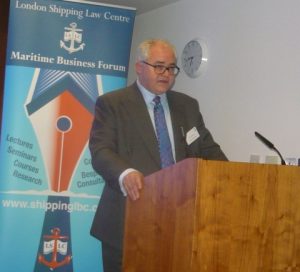 David Bailey QC at the podium

In 2004, however, the Front Comor was arrested by the Italian oil company’s insurers who argued that they were not themselves party to the arbitration arrangements and were entitled to pursue settlement through other channels. They argued their case in Italian and English courts and eventually the European Court of Justice which found that suits could still be brought in particular jurisdictions even if other parties to a dispute had settled through arbitration.

Proposed reforms of the Brussels regulations sought to incorporate arbitration rules while preserving the right to resort to the courts. None of the panellists—-Ian Chetwood of Ince & Co, David Bailey of 7, King’s Bench Walk and Adrian Briggs, Professor of International Law at Oxford University-found these proposals satisfactory. They would not preclude inconsistent judgements and would do little for parties’ commercial requirements for rapid and clearcut dispute settlement.

Professor Andrian Briggs, University of Oxford at the podium

‘Arbitration, West Tankers and Reform of Brussels 1 Regulation’ was held at the London auditorium of Ince & Co, under the chairmanship of The Lord Mance – over ten questions where heard and many more at the reception which followed. Good to see many young practitioners as well as from the old guard!

Corporate Social Responsibility and the Shipping Industry: Towards a Sustainable Journey