Top Posts
Don’t take chances where your health is concerned…
GEODIS opens an airside cargo station at Paris-Charles...
Bureau Veritas opens new laboratory in South Australia
Zurich-Oxford report: How to prepare for the unexpected...
US inflation surge likely temporary – Is disruption...
Infection rates fall sharply… plus more
Art in time of a pandemic: Silviya Georgieva-Sellvida’s...
BCG: Ending the Global Pandemic in 2022
HudsonCyber Announces the Launch of PortLogixTM, its Cybersecurity...
Hot Port News from GAC
London maritime arbitration adapts to the changing times
Home EnvironmentOceanology How the Earth’s oceans plunged the planet into a catastrophic big freeze
OceanologyUnderwater ShippingWhat Others Say

The planet’s last major cold spell 13, 000 years ago was caused by a catastrophic deluge of frigid fresh water from north-west Canada into the Arctic ocean, a new study suggests.   Detailed computer simulations show meltwater from the enormous Laurentide Ice Sheet halted the sinking of very dense, saltier, colder water in the North Atlantic.

That stopped the large scale ocean circulation – the so-called thermohaline circulation – that transports heat to Europe and North America, causing the continents to dramatically freeze.

The findings offer a new explanation for the cause of this last big chill, which scientists had thought was caused by freshwater flowing into the Atlantic through Canada’s Gulf of St Lawrence.   It led to a cold spell lasting more than 1, 000 years known as the Younger Dryas or ‘Big Freeze’, during which temperatures in parts of the northern hemisphere fell to about 10 degrees C colder than they are today.

‘This episode was the last time the Earth underwent a major cooling, so understanding exactly what caused it is very important for understanding how our modern-day climate might change in the future, ‘ said Alan Condron, of the University of Massachusetts Amherst.

The cooling began after Lake Agassiz, at the southern edge of the Laurentide ice sheet covering much of the Canadian Arctic, broke through an ice dam and dumped thousands of cubic kilometers of cold water into the ocean.

The original hypothesis, proposed 1989 by Wally Broecker of Columbia University, suggested that Lake Aggasiz drained into the North Atlantic down the St Lawrence River.   But using the new model, Dr Condron, working with Peter Winsor of the University of Alaska, found that this proposed route would have weakened the oceans’ thermohaline circulation by less than 15 per cent.   That level of weakening, they say, is unlikely to have accounted for the 1, 000-year cold climate event that followed the flood.

Meltwater from the St Lawrence River actually ends up almost 1, 900 miles south of the deep water formation regions, too far south to have any significant impact on the sinking of surface waters.

Meltwater from the St Lawrence River actually ends up almost 1, 900 miles south of the deep water formation regions, too far south to have any significant impact on the sinking of surface waters.   By contrast, Dr Condron and Dr Winsor’s model shows that if the meltwater first drains into the Arctic Ocean, narrow coastal boundary currents efficiently deliver it to the deep water formation regions of the sub-polar north Atlantic, weakening the thermohaline circulation by more than 30 per cent.   They conclude that this scenario, showing meltwater discharged first into the Arctic rather than down the St. Lawrence valley, is ‘more likely to have triggered the Younger Dryas cooling.’   Dr Condron and Dr Winsor ran their simulations on one of the world’s top supercomputers at the National Energy Research Science Computing Centre in Berkeley, California.

Argentina’s Patagonia ice-sheet: Much of Europe and North America would have looked like this after the meltwater from the Laurentide Ice Sheet brought about a dramatic global cooling

‘Our results are particularly relevant for how we model the melting of the Greenland and Antarctic Ice sheets now and in the future.

‘It is apparent from our results that climate scientists are artificially introducing fresh water into their models over large parts of the ocean that freshwater would never have reached.

‘In addition, our work points to the Arctic as a primary trigger for climate change. This is especially relevant considering the rapid changes that have been occurring in this region in the last 10 years.’ 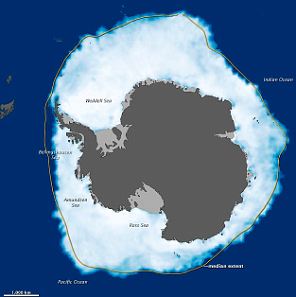 Ice around the South Pole has expanded to cover a record area, scientists have revealed – after saying that the North Pole had lost an unprecedented amount of its ice.

Researchers say – rather confusingly – that both occurrences are down to the ‘complex and surprising’ effects of global warming.

The record Antarctic sea ice cover was revealed in satellite images from the US National Snow and Ice Data Center in Colorado. At the end of the southern winter in September, ice covered 7.51million square miles of sea – more than at any time since records began in 1979.

For the last 30 years the amount of Antarctic sea ice has been increasing by 1 per cent each decade.

While the rest of the world has been getting warmer over the last 50 years, large parts of the Eastern Antarctic have been getting cooler. Scientists say a cooler Antarctic fits in with the unpredictable nature of climate change.

How MAN became a superman in shipping: diesel giant shares its strategy secrets with the superwomen of WISTA Denmark

Europe and the UK inch towards greener financial...