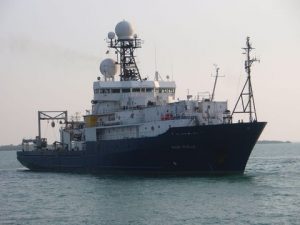 After a six-year voyage on the high seas, braving crashing waves and typhoon-force winds around the world in the name of science, research vessel (R/V) Roger Revelle is coming home to San Diego today*.

Revelle, owned by the Office of Naval Research (ONR) and operated by the Scripps Institution of Oceanography at the University of California, San Diego, is making a home port call for upkeep operations and maintenance—and to have even more scientific research equipment loaded aboard. “We love the Revelle, ” said Dr. Theresa Paluszkiewicz, a program director for physical oceanography at ONR. “Her special sonar system has helped us gain new understandings on many fronts, including deep ocean flows and massive internal waves in the South China Sea, where commerce and the Navy operate.”

The 273-foot ship’s scientific run is only paused, however. After maintenance and the addition of a unique robotic arm for deploying ocean water sampling equipment, it will be back on duty. “We look forward to the ship’s return to sea and new expeditions that address vital concerns for science and society, ” said Cathy Constable, acting director at Scripps. Revelle-generated research has garnered praise from military and civilian scientists alike.

Her missions to nearly 20 countries have seen her exploring the deepest parts of the ocean trenches, studying the upper atmosphere and forging international ties. In addition to ONR, Revelle’s expeditions are supported by multiple federal agencies—including the National Science Foundation and the National Oceanic and Atmospheric Administration—for efficient use of research dollars. Some of the vessel’s recent projects include gathering data on ocean waves and currents, tropical storms, marine mammals and more.

“The scientific progress enabled by the R/V Roger Revelle has been remarkable, ” said Dr. Frank Herr, head of ONR’s Ocean Battlespace Sensing Department. “We’re grateful to those who have taken this ship from South Africa to Chile, and from Vietnam to New Zealand, to advance the frontiers of science.” The ship has also helped international relations. Meetings earlier this year between scientists in the Republic of Vietnam and Americans aboard the Revelle, for instance, were hailed by Paluszkiewicz as a unique opportunity for what amounted to scientific diplomacy.

“It was a great oceanographic diplomatic moment, ” she said. The visit became the foundation for historic new scientific collaboration and ocean expeditions planned for next year between the two nations. R/V Roger Revelle is named for an internationally-acclaimed American oceanographer who advocated for science and technology solutions to help solve problems in developing countries. He also led the charge for the establishment of a University of California campus in San Diego in 1960.

With a successful six-year run under its steel belt, supporters say no one knows what the future might hold for the acclaimed Revelle. “The vessel is a shining star of what education and a focus on technology can do, ” Paluszkiewicz said. Provided by Office of Naval Research

BIO-UV Group to design new BWTS for US...