Engine of the Future is Already Available 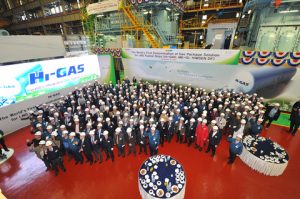 Picture of assembled guests from the Hyundai event

At a large customer event in Korea on 9 November 2012, Hyundai revealed the first, commercial MAN B&W ME-GI engine. The ME-GI is a gas-injection, dual-fuel, low-speed diesel engine that, when acting as main propulsion in LNG carriers or any other type of merchant marine vessel, can burn gas or fuel-oil at any ratio, depending on the energy source available on board and dictated by relative cost of combustibles and owner preference.

The ME-GI type was successfully demonstrated at the ceremony in Korea, culminating in it achieving 100% load when powered by gas with a minimal amount of pilot oil for ignition. The engine subsequently successfully passed its Type Approval Test at the end of November.

In his speech at the ceremony, Ole Grøne – Senior Vice President Low-Speed Promotion & Sales, MAN Diesel & Turbo – said: “In spite of the fact that newbuilding activity presently is relatively low, the regulatory environment of shipping is being tightened, especially with a view to emission control. Hence, development activities are high and HHI’s commitment to work with MAN Diesel & Turbo towards this demonstration of the ME-GI principle on a real commercial engine is highly appreciated by the industry. In this context it should be noted that the ME-GI technology is retrofittable for all existing ME engines.” 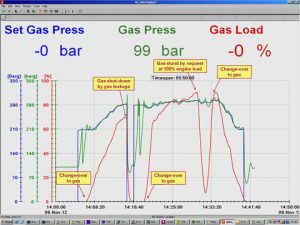 Screenshot from the ME-GI demonstration during gas operation where running on 100% gas was achieved.

Jeong-Hwan, Kim, Senior Executive Vice President & COO Hyundai Heavy Industries, said in his speech: “The success of the dual-fuel ME-GI engine’s prototype test will lead to a great environmental contribution by effectively complying with stricter and stricter regulations, and I am confident that demand for the new engine will continue to rise in the future.”

Lars Juliussen – Senior Manager and Head of MAN Diesel & Turbo’s Diesel Research Centre, Copenhagen – held a technical presentation where he covered the ME-GI’s progress from research test rigs and the 4T50ME-GI research engine in Copenhagen, through its world premiere and demonstration test in May 2011, to that day’s demonstration test at Hyundai Engine & Machinery Division. Juliussen summarised the ME-GI engine as safe, reliable, flexible and clean.

The customer event in Korea stemmed from the announcement in March 2012 where HHI-EMD – the Engine and Machinery Division of Hyundai Heavy Industries, Korea – stated its intention to build an ME-GI prototype, a sentiment matched by Mitsui Engineering and Shipbuilding Co., Ltd. of Japan who simultaneously announced their intention to do the same with a 6S70ME-C rebuilt as an ME-GI engine during the second quarter of 2013. The announcements brought the ME-GI even closer to commercial production.

Hyundai’s full-scale demonstration of the ME-GI principle is based on the temporary conversion to ME-GI of an existing production engine – an MAN B&W 8S70ME-C type – generously placed at its disposal by Frontline, the prominent Norwegian shipowner.

MAN Diesel & Turbo reports the demonstrations as stemming from customer requests to employ the ME-GI engine in new projects and states that production capability for the ME-GI is already available. 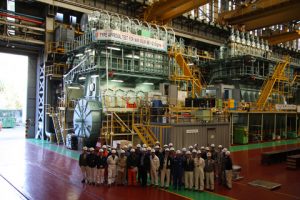 Personnel involved in the successful Type Approval Test pictured in front of the engine.

Unveiled at a major event at MAN Diesel & Turbo’s Copenhagen Diesel Research Centre in May 2011, the ME-GI engine represents the culmination of many years’ work that began in the 1990s with the company’s prototype MC-GI dual-fuel engine. The first two-stroke GI engine, a 12K80MC-GI-S, entered service at a power plant in Chiba, near Tokyo, Japan in 1994.

Mitsui reported adopting twin ME-GI engines as prime movers aboard its concept LNG carrier ‘Double Eco MAX’ in July 2011, a move intended to realise a 30% reduction in fuel costs and CO2 emissions. Similarly, major yards in Korea, Japan and China have, or currently are, developing such concepts.

Depending on relative price and availability, as well as environmental considerations, the ME-GI engine gives shipowners and operators the option of using either HFO or gas – predominantly natural gas but also, eventually, LPG.

MAN Diesel & Turbo predicts a broad, potential market for its ME-GI engine, extending from LNG and LPG carriers to other oceangoing vessel segments such as containerships as well as ships plying a fixed trade. As such, the ME-GI engine represents a highly efficient, flexible, propulsion-plant solution.

MAN Diesel & Turbo’s MC/ME engine family has been on the market since 1982 and seen service in almost every type of marine application on container vessels, tankers of all sizes, bulk carriers, car carriers, RoRo and general cargo vessels. As such, the MC/ME engine is a well-proven product in the industry while the GI (Gas Injection) solution was developed in parallel and finished for testing in the early 1990s. Technically, there is very little difference between fuel-oil and gas-burning engines, but the GI engine provides an optimal fuel flexibility.

The technical presentation’s main points, as revealed at the Hyundai event, can be summed up as thus:

All data provided in this news advise from MAN Diesel & Turbo is for information purposes only, explicitly non-binding and subject to changes without further notice.