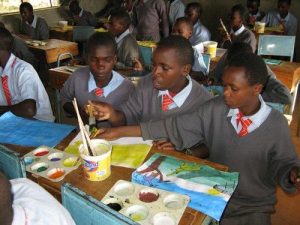 A unique project that capitalises on the power of the paintbrush to promote communal peace and to spread arts education has been raising its profile in London.

The latest plans of MASK, the acronym for Mobile Art School in Kenya, were announced at a reception at the Royal Over-Seas League, St James’s. MASK is a registered charity that fosters creativity among young people throughout the East African country, and has played a part in attempting to heal divisions that catastrophijcally widened into violence in the 2008 elections. 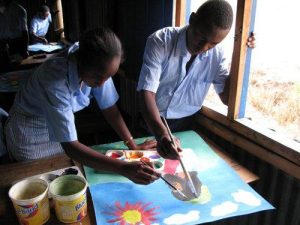 Across a wide area of Kenya, some 1, 500 people were killed and many thousands forced to flee from their homes after political rivalries boiled over, and 150, 000 people remain displaced.

Affiliated with the International Society for Education through Art (Insea) of the United Nations Educational, Scientific, and Cultural Organization (Unesco), and supported by the Nairobi government, MASK is pursuing its aims alongside state  schools in Kenya.

One of its key aims is to promote “peace building through the arts” and in one initiative following the violence of 2008, MASK invited Kenyan vernacular radio stations to record children’s peace messages and broadcast them nationally.

MASK’s latest efforts will centre on its launch of the National Art Competition for Schools in Kenya and East Africa in Nairobi in January 2013. The final selection of artwork will be exhibited at Nairobi Art Gallery and the Saatchi Gallery in London. The aim is to increase the number of young people engaged in visual arts, and to raise their aspirations. 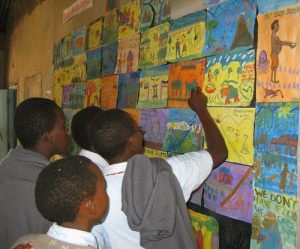 London artist Alla Tkachuk was moved to found the charity after a painting visit to Masai areas where she met a schoolteacher who told her that although art was meant to be part of the school curriculum, it lacked priority because it was not recognised as an examinable subject. Ms Tkachuk was determined to do what she could to remedy the paucity of education in this field, through “unleashing creativity in young people for socio-economic development, ” as the charity says.

In the region, the creative resource of almost 100m young people is said to remain under-utilised.

The progress of Ms Tkachuk and her supporters is evident in MASK’s statement that since 2006 more than 25, 000 young people in 20 schools have benefited from its programmes, and some young people are now making a living out of their talent.  For example, 17-year-old Jane Enyen is earning money by selling her wildlife paintings to farmers around Lake Naivasha. Joel Gatua, aged 21, of West Laikipia, has been signed up an advertising agency and paints murals in restaurants in Nairobi and Mombasa.

At the London reception, Dr Joe Sang, Minister Counsellor for Cultural Diplomacy at the Kenya High Commission, praised the work of MASK and said it was the government’s job to bring forward the artists “who are out there.” Hopefully in the coming year the High Commission would help set up exhibitions “to bring together some of our best artists.”

Dr Lyndsay Bird, of the Unesco International Institute for Education and Planning, and trustee of MASK, spoke of art as a fundamental human need, both for the human spirit and for economic and development reasons. 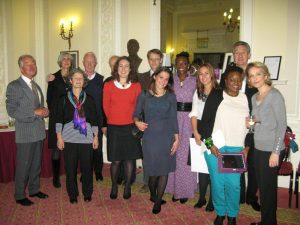 Brittany Glenn, an international development specialist who has spent time as a volunteer with the programme, said its workshops had changed children’s perceptions of their classmates by developing their sense of empathy with others. “Teaching about peace and culture is shared through art, ” she said.

The MASK youth art competition – the first of its kind in Kenya – is open to residents of Kenya and members of the east African diaspora who are up to 25 years old. The top 100 entrants will have their work displayed at the Nairobi Art Gallery in June and July, and at the Saatchi Gallery in London from September 10-October 10 2013. There will be prizes for the three artists judged to be best, and a winning state school will receive a year’s supply of art materials.

For the competition, media partners in Kenya are Radio Africa and the Star, and in the UK the Sunday Telegraph.

The theme of the competition is “What makes you proud about Kenya, ” and deadline for entries is the end of April 2013.

MASK continues to appeal for corporate and private sponsorship in cash and kind: www.mobileartschoolinkenya.org