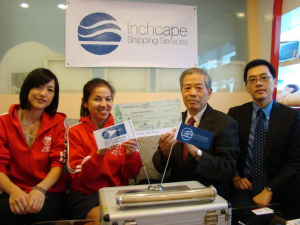 The ISS Lighthouse Relay Voyage baton, which is raising money for local charities supporting sick and disadvantaged people, has arrived in Sydney, Australia, on the latest leg of its tour around the globe. The ambitious fundraising initiative by Inchcape Shipping Services, the world’s largest maritime services provider, has now raised nearly $125, 000 since its journey began at the Inchcape Reef, off the coast of Abroath in Scotland.

From its original departure at the home of the Bell Rock Lighthouse, the baton will leave Sydney for Auckland, New Zealand, for the next stop of its Australasian journey.  Over the last six months it has travelled across parts of the Far East and South-East Asia, including Hong Kong, Shanghai, Taiwan and Indonesia.

The baton, containing details of the nominated charities from each country where ISS has a presence (67 countries to date), is working its way around the globe raising thousands of dollars for local charities at each location with the efforts of local ISS employees, customers, suppliers, and match funding by the company. 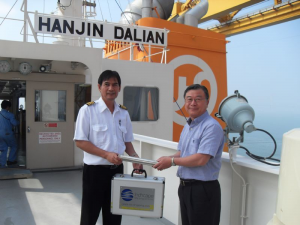 The baton arrived in Hong Kong on board MV San Cristobel and was received by ISS Hong Kong’s Operations Manager, Sunny Chan, from Captain Marcin Pielas, and a small ceremony was held and a donation presented to Stephen Miller, Senior Chaplain of the Mission to Seafarers, the chosen charity for ISS Hong Kong.

Next stop was Shanghai, China, onboard Hamburg Sud’s MV Monte Pascoal.   ISS China’s  charity, the Red Cross, received its donation in a special presentation with students. This organisation helps students who have been orphaned or disadvantaged by supporting their studying and living conditions. The baton was then handed over on the MV Blue Star by the General Manager of ISS China, David Young, to Captain Zhou Genguam.

From Shanghai to Keelung, Taiwan, where a presentation was held by ISS Taiwan’s General Manager, Joeson Wei and Operations Manager, Jeff Lee,   who presented ISS Taiwan’s donation to representatives of the Child Welfare League Foundation.

Then onto Inchon, South Korea, onboard MV Wan Hai where the baton was received by ISS Korea’s Commercial Manager, Jerry Lee. ISS Korea presented its donation to its chosen charity, the Migrant Health Association which promotes and protects migrant health by providing various health care services, particularly for children.

ISS Executive Managing Director, John Song, later handed over the baton in a ceremony onboard MV Hanjin Dalian to Captain Real Eduardo Rivarzez, for its voyage to Jakarta, Indonesia.

At Jakarta, ISS Marindo raised funds for Unicef and presented a cheque to its fundraising representatives.  ISS Marindo’s Finance Manager, Harry Baharudin and Customer Relationship Manager, Helmy Suprianti delivered the baton to the Master of the MV Wana Bhum for its journey to Sydney, Australia, where it was received by the General Manager of ISS Australia, Stuart Craker.  ISS Australia raised money for its chosen charity, Mission Australia, a community service organisation that works to transform the lives of Australians by providing community and employment services.

The baton will next set sail from Sydney to Auckland, New Zealand, onboard Carnival’s Costa Neoromantica.  From here it will travel onto Papua New Guinea and then onto Japan.  For full details on the baton’s continued progress around the world, visit www.iss-shipping.com