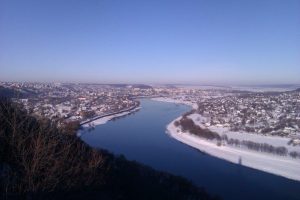 New developments in transport and tourism look set to bear fruit for the small east European nation of Moldova, whose geographical shape on the map has happily – for a land proud of its viticulture – been likened to a cluster of mature grapes.

A $12m loan has just been announced by the European Bank for Reconstruction and Development to support modernisation of port infrastructure in the country. And tourism promotion is clearly in focus after the country was presented as a new destination at international level to tourist chiefs attending the important World Travel Market 2012 in London.

In addition to all this, a new report is being released at a forum in London on enhanced prospects for trade between the UK and Moldova.

The EBRD is lending $12m to Danube Logistics, which owns and operates Giurgiulesti International Free Port, to finance the construction of a mixed-gauge rail terminal.  This will open the way to more trade with the European Union, which uses narrow gauge, and to transport of goods to former Soviet countries which have broad gauge. Sue Barrett, EBRD director for transport, said: “Rehabilitation of the infrastructure in Moldova is an investment priority for the Bank.”

Giurgiulesti is located at the confluence of the rivers Danube and Prut in the south of Moldova, between Romania and Ukraine. Besides the EBRD, institutions including EuropeAid, World Bank, Millennium Challenge Corporation, United Nations Development Programme, and the governments of Sweden and Germany are supporting reforms and upgrades to Moldovan facilities.

Natalia Cojuhari, Incoming manager of Ways Travel (www.ways.md) which promotes tours to Moldova, Romania and Ukraine, introduced a series of tourism offerings at the World Travel Market. Much is being made of the Moldova’s prowess in matters of the vine, and its intriguing cultural offerings which are little known beyond its borders. The republic boats 142 wineries, of which 23 are open to the public.

As an example, let us take what Ms Cojuhari’s company markets as the Moldova Classic Tour, of four days’ duration. On day one, a local guide and driver takes the visitor from the airport to hotel and a tour of the capital, Chisinau. This includes visits to the Museum of Natural History and Ethnography, Central Park, the Alley of classic Moldovan literature, the monument to Stephen the Great, Great National Assembly Square, the Triumphal Arch, the Nativity Cathedral, and the 500-seat Organ Hall.

Day two features what has been described as “arguably Moldova’s most fantastic sight, ” Orheiul Vechi, a cave monastery complex. The monastery of St Maria Dormata has been carved into cliffs by monks over the centuries. After a folk programme, guests go on to Cricova winery, known for its sparkling wines in the French style.  Cricova is described as an underground wine city with wide streets, warehouses, and tasting rooms. Total length of the galleries is 120km.

On day three, just an hour away, is Transnistria, known to some as “the state that does not exist.” In Tiraspol, the capital of this breakaway territory on the River Dniester, remain many symbols of Soviet times – including the hammer, sickle and red star in the coat of arms of the Pridnestrovian Moldavian Republic . A city tour includes the Supreme Soviet building, Lenin monument, and Square of the Soviet Constitution, and cognac tasting in the Kvint distillery.

A seven-day version of the Moldova Classic Tour embraces in addition the oldest ecclesiastical construction in the country, the Capriana monastery, and what is said to be the largest winery in the world:  Milestii Mici. With a total length of 200km at a depth of 40 to 50 m, this establishment made its mark in 2005 in the Guinness Book of Records for its vast collection of wine. Constant temperature in this “kingdom of wine” is 12C to 14C and humidity is 85%–95 %.

In the southeast of Moldova is Purcari winery, home of centuries-old traditions in viticulture and the basis of the modern wine-making enterprise Purcari, with its chateau adorned by regal interiors. Purcari wines were served at the tables of monarchs including Nicholas II of Russia, and Queen Victoria and George V of Britain. Back on the spiritual theme, the tour goes on to Saharna and Tipova monasteries, 110 km north of Chisinau. Tipova consists of 15 caves at dizzying height in the rock.

Other tours featuring culture and wine in Moldova begin in Romania, enabling appreciation of the historical turbulence of the region, which led to the creation of the new state of Moldova after the collapse of the Soviet Union. After World War II, the region had been divided into two parts, one the Romanian region of Moldova and the other Old Bessarabia, now known as Republic of Moldova. Both regions are united in their excellence in wine.

In all, there are four wine routes for tourists in Moldova, which at one stage (1997-2002) exceeded the achievement of the United States in its volume of wine exports. Some of the tours can be extended into Ukraine, with special visits to the Odessa catacombs held by partisans in World War II, and – again – to wine areas, and a chance to learn of the significance of the sea port.

In Moldova, population 3.6m, the authorities are seen by the EBRD as pursuing ambitious reforms to improve the business environment and public sector governance. Privatisation of national railway, airline companies, Banca de Economii and telecommunications is to be effected.

The only Moldovan port on the Danube and with the status of a free economic zone, Giurgiulesti  is termed a multi-purpose logistics hub, including terminals for containers, general cargo grain, coal and vegetable oil.

The 716km River Prut, which joins the Danube before flowing into the Black Sea, forms the western border of Moldova. The Dniester, 640km, is the main river in the east.

In its statement, the EBRD said that the terminal for petroleum and other products at Giurgiulesti will create opportunities for international development of transportation by river and sea. The scheme will do away with the need for transhipments onto and from railway wagons by truck and crane, making port operations much more efficient for Moldovan businesses.

Ms Barrett of the EBRD said: “This project will help implement a major programme to support the ever increasing potential and demand for river and maritime transhipment services. The port already plays a big role in offering a tri-modal transport infrastructure, a low cost environment and a unique Customs and tax regime due to its free economic zone status.”

The EBRD, one of the largest investors in Moldova, has to date signed 90 investment projects totalling more than €700m in the country, covering energy, transport, agribusiness, general industry, and banking.

Invited speakers include Keith Shannon, the British Ambassador to Moldova, and the Moldovan Ambassador to the UK, Iulian Fruntasu. Case studies will be presented by Ian Tidder of telecoms software and system services company Computaris, and Caroline La Chappelle from Mott MacDonald (river basin management). Raymond Breden of KPMG, who is chairman of the British-Romanian Chamber of Commerce, will talk about links with Moldova