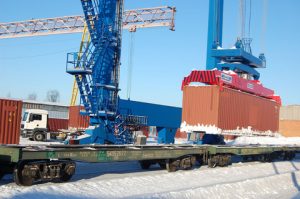 The new Technoros RMG transfers container between road and rail modes at the MANP terminal. (The yellow crane in the background is the first MANP RMG and remains in service.)

Global Container Services (GCS) has added a second rail-mounted gantry crane (RMG) at its MANP terminal on the outskirts of Moscow. This has increased the number of train arrivals it can handle up to five or six per week. In addition, it has increased the container yard (CY) capacity to over 2500TEU and the rail track length to 3km.

The new RMG was manufactured in Russia by Technoros and has a lift capacity of 36 tonnes. Containers can be stacked five-high (5+1) and its internal span of 42 m allows containers to be stacked 12 across. It has an outreach that enables it to service a parallel railway track.

MANP is located next to the Kresty railway station some 45 km SW from the Moscow ring-road around which a number of important road distribution hubs are situated. MANP is also close to the important Kaluga region where a number of major international companies have invested in manufacturing, assembly and distribution facilities. These well-known names include Samsung, Panasonic, LG, PSA Peugeot Citroën, Mitsubishi, Adidas, X5 and Nestlé. Some of these companies already use MANP as an efficient facility for receiving, storage and distribution of goods in the highly important Central Russia market.

The total area of the MANP terminal is 14, 6 ha and includes several warehouses offering a total storage capacity of 15, 000m2. The facility has a customs bonded area for the acceptance and clearance of transit cargo.

MANP also operates its own fleet of trucks, recently increased by five new units, for the distribution of goods from the terminal to the storage and production sites of consignees.

The terminal is served by dedicated trains from Novorossiysk and new intermodal solutions via the ports of Saint-Petersburg/Ust-Luga, the Ukraine and the Russian Far East are under active consideration.

The initials MANP stand for MosAgroNauchPribor, a name dating back to Soviet times when the facility was used for the storage of agricultural survey equipment. For obvious reasons, the name MosAgroNauchPribor is no longer used!

In the near future, the group plans to further expand its existing companies and add new ones in order to match the growing demand for professional transport services in Russia, the CIS and further afield. A strategic target of GCS is to triple the volume of revenue and double its container throughput over the next five years. That will be achieved through consolidation of its vertically-integrated systems for seamless delivery of containers to any destination in Russia and world-wide.  In embracing that challenge GCS firmly relies on its 900+ staff and close partnerships with leading Russian and international transport companies.

David Brookes*, BP, on the growing demand for accurate information