ISF launches new on board training book for engine cadets 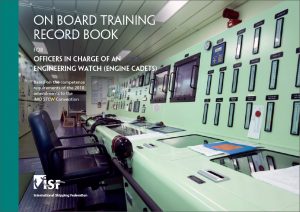 The International Shipping Federation (ISF) has updated its widely-used On Board Training Record Book for Engine Cadets to meet the atest requirements governing seafarers’ training emanating from the STCW 2010 Manila Amendments.

“The competence of engine officers is critical to safety and environmental protection. The updated ISF Book enables cadets and their companies to monitor and evaluate their on board training in a structured manner in accordance with the new STCW Convention requirements.” ISF Director Employment Affairs, Natalie Shaw, explained.

New regulations set out in the 2010 amendments to the IMO STCW Convention controlling seafarers’ training standards came into force in January 2012. Use of a training record book providing evidence of structured on board training is mandatory for trainees seeking to qualify as ships’ officers, and the ISF books are referred to as a model in the footnotes to STCW 2010. The STCW 2010 standards must be applied to new trainees from July 2013.

The revised publication is the fourth in a series of updated ISF training record books following the recent publication of revised On Board Training Record Books for Deck Cadets, Deck Ratings and Engine Ratings (the latter both covering the new grade of Able Seafarer).

The new ISF Book for Engine Cadets contains structured on board training tasks formulated around the revised standards stipulated by STCW 2010, including new competences such as application of leadership and team working skills and proactive measures to protect the marine environment.

As the principal international employers’ organisation for ship operators, representing national shipowners’ associations and some 80% of the world merchant fleet, ISF wishes to ensure that engine cadets optimise their seagoing service and can demonstrate a broad variety of skills.

ISF is currently in discussion with the Philippines and other important seafarer supply countries to ensure that the use of the ISF Books is approved as a part of their national STCW certification processes.

“Many shipping companies are training cadets, across their fleets, from a variety of countries and it is important that they can use a standard international book.” said Mrs Shaw.

•ISF is the identity used by the International Chamber of Shipping (ICS) in its capacity as an employers’ organisation concerned with labour affairs and training matters.

•The On Board Training Record Book for Engine Cadets can be purchased from maritime booksellers, or direct from Marisec Publications for UK £30 (including airmail postage) or for £20 when five or more copies are ordered.

sir,
is indian tar book accepted in uk? or should i hav an isf tar book to writye my class for in uk??

HI, Good Day all
i have completed my 36 months of sea service.. i wil do my exams in India next year.. but i dont know have TAR Book… i am Deck Rating.so where can i Get my TAR Book for Ratings for Competence Exams.. suggestion plz… its an urgent.,.. i am joining in another 10days . need to get book asap,,,do need ful .. tq