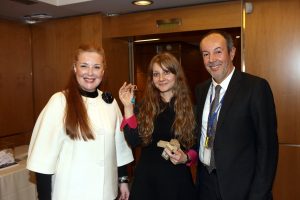 During a special reception hosted by its Chairman, Dr. John Coustas, at the Danaos Shipping Co. Ltd building in Piraeus, HELMEPA yesterday celebrated the traditional cutting of its New Year’s cake.

During his brief address, HELMEPA’s Chairman spoke about how the goals set at the beginning of 2012 had been achieved. Specifically, he referred to the revision of the Annual Refresher Training Program to which member-companies themselves contributed, the increased participation nationwide of children in the “HELMEPA Junior” program and the use of contemporary social media and networking means to raise environmental awareness. The Chairman expressed his wish that HELMEPA’s message reach even more individuals across Greece and abroad in the New Year.

Aside from the members of the Board of Directors, the President of the Union of Greek Shipowners, Mr. Theodoros Veniamis, General Secretary of the Panhellenic Seamen’s Federation Captain John Halas, the President of the Hellenic Chamber of Shipping, Dr. George Gratsos, HELMEPA Honorary Members Mr. Pavlos Ioannidis, Dr. Matthew Los, Mr. John Polichronopoulos and representing Mr. Themistocles Vokos, Mr. Theodoros Vokos, all honoured the event with their presence. Representatives of member-companies as well as members of the Maritime Press who support HELMEPA’s efforts were also present.

The fortunate winner of the draw for the “lucky florin” was HELMEPA Secretariat staff member, Ms Natalia Tsantsaridi.

Prior to the ceremonial cutting of the cake, a broad meeting of the Board of Directors took place, including the participation of Honorary Members of the Board. During the meeting, the new activities undertaken and those which continue to be implemented in both the Maritime and Environmental Awareness Sections were presented. Particular reference was made by the members of the Board to HELMEPA’s latest exceptionally well prepared publication on 30 years of HELMEPA and MARPOL. They also made special mention of the excellent feedback received by their own staff following participation in HELMEPA’s training seminars. The Chairman emphasised the significance of continuing the efforts to spread HELMEPA’s voluntary spirit.

ESPO 2013 Conference to Focus on Cooperation and Ports Policy