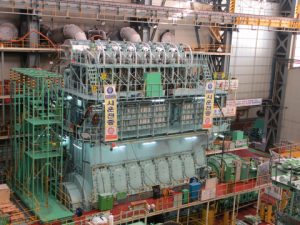 HHI-EMD, the engine and machinery division of Hyundai Heavy Industries, has reported that the world’s first MAN B&W 7G80ME-C9.2 passed its official shop test on 16 January 2013 in Korea. The MAN Diesel & Turbo licensee reported that the shop test proceeded as expected and was a success. Engineers from MAN Diesel & Turbo took part in the entire prototype process, culminating with the very first engine start on 10 January, the official shop test on 16 January and an overhaul inspection the following day. The engine is bound for a Greek customer – Almi Tankers – and will power a VLCC due for delivery by the Daewoo yard in May of this year with sea trials taking place in April. The new engine is the first of two in an identical package ordered by Almi with a second VLCC scheduled for delivery in December of this year. Speaking at the time of the initial announcement of the Almi order, Ole Grøne – Senior Vice President Low-Speed Promotion & Sales – MAN Diesel & Turbo said: “Traditionally, super-long-stroke S-type engines, with relatively low engine speeds, have been applied as prime movers in tankers. Following the efficiency optimisation trends in the market, the possibility of using even larger propellers has been thoroughly evaluated with a view to using engines with even lower speeds for propulsion of particularly VLCCs.

We also see a clear trend with focus on fuel optimisation. We now have around 100 G-type engines on order, including the container and bulker segments, which is a successful introduction”. He continued: “VLCCs may be compatible with propellers with larger propeller diameters than current designs accommodate, and thus higher efficiencies can be achieved following an adaptation of the aft hull design to accommodate the larger propeller. The new, ultra-long-stroke G80ME-C9 engine type meets this trend in the VLCC market.” It is estimated that such new designs offer potential fuel-consumption savings of some 4-7%, and a similar reduction in CO2 emissions. Simultaneously, the engine itself can achieve a high thermal efficiency using the latest engine process parameters and design features. The G-type programme The G-type programme was introduced to the market in October 2010 with the G80ME-C9 model. MAN Diesel & Turbo subsequently expanded the ultra-long-stroke programme in May 2011 with the addition of G70ME-C9, G60ME-C9 and G50ME-B9 models.

The G-types have designs that follow the principles of the large-bore Mk-9 engine series that MAN Diesel & Turbo introduced in 2006. Their longer stroke reduces engine speed, thereby paving the way for ship designs with unprecedented high efficiency. View of the new 7G80ME-C9.2 engine on the testbed in Korea About MAN Diesel & Turbo MAN Diesel & Turbo SE, based in Augsburg, Germany, is the world’s leading provider of large-bore diesel engines and turbomachinery for marine and stationary applications. It designs two-stroke and four-stroke engines that are manufactured both by the company and by its licensees. The engines have power outputs ranging from 450 kW to 87 MW. MAN Diesel & Turbo also designs and manufactures gas turbines of up to 50 MW, steam turbines of up to 150 MW and compressors with volume flows of up to 1.5 million m³/h and pressures of up to 1, 000 bar. The product range is rounded off by turbochargers, CP propellers, gas engines and chemical reactors.