Coffee, Candles, and the City: the story of Edward Lloyd

This 17th Century engraving by J. Faber is thought to be of Edward Lloyd

By 1663 over 80 coffeehouses could be found within the old Roman walls of the City of London.  Inside, businessmen, writers, poets and members of the public would drink, think and talk into the night.

However, they were not places for ladies. Indeed, the Women’s Petition Against Coffee of 1674 vigorously complained how this new drink had transformed their once industrious men into layabouts who spent all their time in coffeehouses.

Charles II, a king who liked to keep women happy, clearly listened. He shut the coffee houses down in 1685, but public outcry forced him to reverse this decision after just 16 days.

But for those whose business had to do with ships, the place to be was at the Lloyd’s Coffeehouse in Tower Street. And the man to meet was Edward Lloyd.

Edward Lloyd was born around 1648 and may have originated from Canterbury, where his father was thought to be in the stocking-knitting business. At the time, this was a lucrative trade as men wore stockings from the knee down.

The parish records of All Hallows Church suggest that Edward Lloyd and his wife Abigail arrived in London around 1680, around the time of the birth of their third daughter, Mary and the death of their eldest son, Edward.

The City at the time consisted of two worlds; a world of ships and a world of money. Both converged in a tiny area between the Tower of London and Thames Street, close to Trinity House and the Navy Office in Seething Lane, where Samuel Pepys once worked.

Tower Street has vanished long ago into history but the name lives on, as it was here that Edward Lloyd ran his coffeehouse. At the time, there was a lack of a central  meeting place  for underwriters and brokers, – known at the time as “office-keepers” as “broker” then meant a receiver of stolen goods.

The first reference to Lloyd’s Coffee House is to be found in the London Gazette of 21-25 February 1688 in an advert announcing a reward for a stolen horse – 300 years before Lloyd’s paid out for another missing horse, Shergar.  See the original advert in the picture below.

By the end of 1691, business was booming. Edward Lloyd, now 43, moved premises to No.16 Lombard Street, across the road from the Royal Exchange and in the heart of the merchants’ quarter. The new coffee house was next to a watchmaker named Finch.  We can imagine it as a large room with a sanded floor, a bar and tables with chairs and benches.

In 1692, Edward had a staff of three men and two girls, whose job, besides dispensing coffee, tea and sherbet, was to see that the regulars had pens, ink and paper.

By 1698, Lloyd’s had become the scene of regular candle auctions, a dramatic 17th century mode of auctioneering where bidding began when a short stub of candle was lit, and the successful bid was the last before the candle guttered. Lots varied from ships and cargoes of “coigniac and brandy” to “a parcel of Turkish coffee” and “53 Hogshead of extraordinary neat Red French Wines”.

It’s been suggested that Edward may have been involved with editing ‘Lloyd’s News’  – the single sheet carried a few items of general news, but mostly recorded shipping movements – but he left for America in 1696 when the Government shut down the paper.

Today, a blue plaque on a Sainsbury’s supermarket is all that remains of the coffee house…

Edward Lloyd’s high standing in his  local community can be seen in his election in 1697 as a sidesman – responsible for greeting members of the congregation – of St Mary Woolnoth Church, on the corner of Lombard Street.

A few years later, he became a Constable and Questman, an early form of neighbourhood watch in the days when streets were dimly lit and on moonless nights, marauding youths would demand your purse at swordpoint.

We also find his name being used in 1703 as a man who could help travellers in need of a passport.

In a new will, made in January 1713, just a month before his death, he described himself as “weak in body though of sound and disposing mind and memory”.

He named his surviving daughters in the Will, but not his son Hugh who may have died previously.  A large legacy was left to his ‘dear and loving wife’ of less than a year, Martha.  On 28 January, he amended his will assigning the lease of his coffee house to head waiter, William Newton, who two days later, would marry his youngest daughter Handy Lloyd. 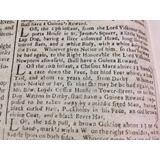 On Sunday, 15 February, he died presumably surrounded by his daughters and ‘dear and loving wife’ Martha.

At a time when it was rare for newspapers to mention the deaths of private citizens, the following, taken from The Flying Post, feels like a tribute to the man whose coffee house had become the centre for everything to do with ships:

It was the only item of London news that day.

However, with Edward Lloyd’s death, the Lloyd’s story was only just beginning. A new era was about to dawn – an age of reason and enlightenment.  It was time for Lloyd’s and marine insurance to become synonymous.