Top Posts
Hot Port News from GAC
MarISOT
Don’t take chances where your health is concerned…
Record performance for GEODIS in the first half...
Fugro helps NOAA update nautical charts in Alaska...
Is the future of sovereign debt digital? Baron...
Government clarifies Health Pass eligibility…
“Moving Day” at the 54th Governor’s Cup as...
Hot Port Newsw from GAC
Stormy seas for importers
Industry & Governments urged to boost vaccination drive...
VesselsValue – Half Year Review: Trade
Hundreds of ways to get out on the...
Home Insurance and Reinsurance Space: the insurers’ final frontier
Insurance and ReinsuranceSafety and Security 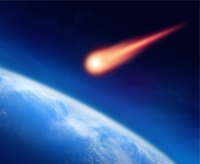 Fri 15 Feb 2013 – An asteroid passing near Earth and meteors striking Russia are a reminder that space risk is always on insurers’ radars.

Since 1995, nearly 10, 000 Near Earth Asteroids have been discovered by observatories across the world. More than 860 of these have been classified as ‘large’ – one kilometer in length or larger.

NASA co-ordinates tracking this activity and operates a service called the Near Earth Objects Program to keep an eye on these incoming ‘killer’ asteroids.

Lloyd’s Realistic Disaster Scenarios do not include a ‘doomsday’ event caused by an object from space but insurers do sometimes have to consider out-of-this-world catastrophe exposures. The possible outcome of a large asteroid hitting an urban environment is one of them.

Four years ago, risk modelling specialists at RMS looked at the 1908 Tunguska event, when a large part of Siberia was laid to waste by an exploding asteroid. Early in the morning, on 30 June 1908, a giant airburst occurred over the basin of the Podkamennaya Tunguska River in Central Siberia, Russia. It levelled trees over an area of 2, 000 km sq and produced seismic and pressure waves that were recorded all over the world.

The released energy was later estimated to be equivalent to a ten megaton TNT explosion, about 1, 000 times as powerful as the nuclear bomb dropped over Hiroshima in 1945. The blast was attributed to the explosion of an asteroid in the lower atmosphere, at a height of five to ten km over the remote Siberian forest, and measuring approximately 50m in diameter.

Theoretically an asteroid could land anywhere, so RMS modelled a Tunguska type event occurring over New York City. With a population exposure of nearly ten million, their model forecasts 3.2 million fatalities and 3.76 million injuries. The total economic exposure under the explosion’s footprint measures around $2trn and as a result, RMS estimates property losses at around $1.19trn.

What’s the likelihood of that actually happening? RMS cites a study based on different data sets that estimates a mean return period of 1, 000 years for earth collisions with objects similar in size to the 1908 Tugunska event. That’s between 400 and 1, 800 years. So Bruce Willis and Ben Affleck – heroes of the hit movie Armageddon – are not going to need to get their drilling equipment out any time soon.

However, as residents of Russia’s Chelyabinsk region have experienced, small objects can burst through the atmosphere at any time. There is around a 1 in 250 chance of an asteroid between 30-100 metres across colliding with Earth every year – so watch this space.

Coffee, Candles, and the City: the story of Edward Lloyd