Classification societies: Liability must stay limited or watch out for disaster 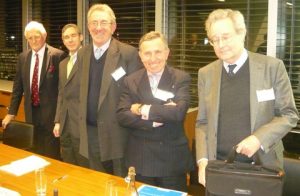 A stern warning against imposing unlimited liability upon classification societies following marine accidents was issued during a London Shipping Law Centre seminar on Thursday, February 21st. The seminar took place at the 33rd  floor state-of-art auditorium of Reed Smith in the City and was attended by nearly 130 delegates!

Michael Grey, master mariner, journalist and lecturer, forecast “a whole slew of unintended consequences if societies had their liabilities extended. They would find it “absolutely impossible” to insure themselves against the extraordinary potential costs of their liabilities being no longer limited. In short, a society could be wiped out by a single accident.

Discussions about immunity and liability had arisen as the role of large modern classification societies had steadily expanded. “They have moved from providing assurance for those insuring ships about their strength, mechanical adequacy and seaworthiness to operating as Responsible Organisations on behalf of Flag States, conducting a high proportion of all maritime research and constantly widening their remit into new areas.”

Mr. Grey told over 100 Centre members at Reed Smith’s London offices that the changing terms of reference of the societies had made them less easy to understand. This had helped push them into the firing line rather than elusive owners or flag states when things went badly wrong.

“In much of the post-accident debate in the media, the inevitable calls are made for the responsible people to be hunted down and punished. One only has to look at some of the ill-informed comments emerging from Brussels, national governments and coastal states in the aftermath of an accident to realise that these people  frequently hit out with very little knowledge of the appropriate target.” Critics seemed unaware that the ship owner had primary day to day responsibility for his vessel.

A ship can never be under the constant scrutiny of its classification society. A survey is a periodic assessment of the vessel’s structure and machinery—-an evaluation at a moment in time. Class does not normally board a ship uninvited to inspect it. Such is the size and complexity of modern ships that class surveyors cannot possibly examine every square inch of a ship and its equipment. They adopt a sampling procedure, reinforced by their knowledge and experience and backed by research into areas of vulnerability.

To counter these “terrifying liabilities, ” surveys would have to be extended: far more time, many more surveyors, no sampling, no flexibility, no allowance for judgement. Costs would soar to cover every loophole against possible claims. “Bureaucracy would be horrendous and defensive paperwork awesome.

“These costs would be passed on from societies to ship owners to flag states and to ship users. Society in general would pay a very heavy price. The present system, where a classification society is permitted to limit its liability for the faults of its employees, is both pragmatic and reasonable. The replacement of this system would be a disaster, not just for the societies but for shipping itself.” 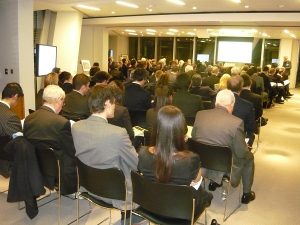 Dominic Happe of Stone Chambers highlighted the arguments against imposing a liability on classification societies.The owners’ undoubted duty to provide a seaworthy vessel might be undermined if classification societies assumed some responsibility to third parties in this respect.  Societies might have only fleeting contact with and brief opportunities to observe the vessels. They should not be the de facto insurers of the vessels they surveyed. “Not only is the liability not commensurate with the amount of control that a classification society has over a vessel. It is also not in accord with the intent of the parties, the fees charged or the services performed.”

However, these arguments appeared “inadequate as a basis of absolute immunity where the other elements necessary for the imposition of a duty of care can be established.” 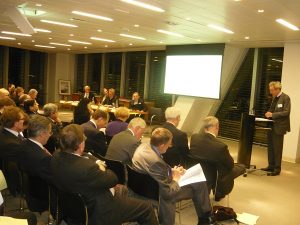 Luc Grellet at the podium delivering his points

Luc Grellet of Reed Smith, Paris explained that the preparatory work for the 1992 Civil Liability Convention showed that potential claimants after an accident were concerned that owners’ liability should not prevent claims being made on other involved parties, such as shipbuilder, repairer or classification society.However, the societies could not be held liable for the lack of ship maintenance by the owner. However, the liability regime for the societies varied between countries, depending on whether civil or criminal law applied. The advantage of common law jurisdiction was that plaintiffs had to prove that classification societies owed a duty of care to third parties.

Francesco Siccardi of Siccardi Bregante, Genoa said that a plea of immunity from jurisdiction by a classification society might be legitimately submitted and granted, subject to possible exceptions in tort. The principle had been confirmed by the Court of Cassation and by two “convincing and reasoned” Italian judgements and US precedents.

The seminar was chaired by Sir David Steel, commercial arbitrator and mediator. There was a “heated” debate with over ten questions, statements, views,  the first coming from Dr. Phil Anderson, managing director and founder of risk consultancy ConsultISM,  raising a dissenting voice over the record of class. Dr Anderson, a master mariner with 25 years in P&I in claims and risk management, said he had been involved in root cause analysis of 100 maritime accidents. In many cases, certificates had been issued by societies, as class or as recognised organisations, which in his opinion should never have been issued. In 50% of cases, there was a very high probability that the risk of these accidents would have been reduced to almost zero if the society had done what it was supposed to do.

The additional plus of the event was the great number of students, young solicitors and all sectors of the shipping industry attending from the Square Mile and beyond!

The nice reception which followed with drinks and excellent dips was a continuation of the seminar with the speakers surrounded by the delegates discussing the issues further!