On the waterfront with one of America’s greatest artists: new Royal Academy exhibition celebrates George Bellows

On the waterfront with one of America’s greatest artists: new Royal Academy, By James Brewer

On a grey day just over a century ago, the American realist painter George Bellows went down to the Brooklyn waterfront and stood watching a mighty ocean ship discharge.  He was struck especially by the somewhat dejected mannerisms of the waiting longshoremen.  The result was to be a huge and impressive oil painting in which the artist contrasts the miserable lot of the day labourers with the grandeur of the majestic ship and the distant sunlit skyscrapers that symbolised the brash capitalism grabbing hold of their nation. Of the nine workers in the scene, one is turning away downcast in the shadows – perhaps he has failed to secure a job that day.  The plight of these men helps explain how later the dockworkers were to become some of the most tenacious and ruthless fighters for union rights and job protection. There is a foretaste here of Marlon Brando and On the Waterfront… 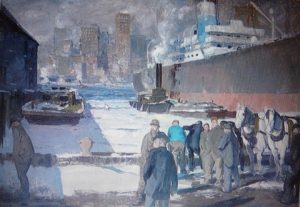 Men of the Dock, oil on canvas, by George Bellows (Randolph College, Lynchburg)

We can imagine ourselves on the noisy New York waterfront as we stand in front of the canvas Men of the Docks at the Royal Academy of Arts exhibition (March 16-June 9 2013) George Bellows: Modern American Life. In North River, a passenger ferry and tugboat compete with cliffs and other natural formations for attention, the latter predominant despite the importance to the city of its access to water.

This marvellous, sensitive draughtsman who died in 1925 of appendix operation complications at the age of only 42 is scarcely known in the UK, so the Royal Academy is performing a great service in staging the first British retrospective of his work. In his day, he was considered one of the greatest artists in America, and surely he is a worthy follower in the footsteps of two of his heroes, Velázquez and Manet.

He was chronicler of the thrusting urbanisation of New York but also of the seascapes of Maine, where he spent a few summers that resulted in more than half of all his oeuvre. In conveying the grandeur of the sea, Bellows followed the advice of fellow marine artist Winslow Homer (1836–1910): “Do it with one wave, no more than two.”

This side of Bellows has had little recognition for decades: and just as unfairly, he is best known for his slugging pictures of boxers, but he painted far more portrait pictures of women, with an unsentimental yet sympathetic eye.

The London show is basically a transfer of the exhibition at the National Gallery in Washington DC last year of 130 paintings, drawings, and lithographs of American life from the industrial heft of New York, to Maine seascapes, sporting contests, and urban snow scenes with compelling command of perspective. Among them are panoramic riverscapes executed between 1908 and 1913 as he viewed the East River from Manhattan, and the Hudson River from another side of the metropolis. 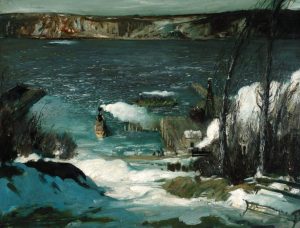 It all amounts to a glorious opportunity, and one that will not come around soon, to see the best of his work, astonishing in its variety and panache, and always approachable, with almost everything on loan from great American galleries and institutions.  Certainly not to be missed.

Bellows moved from Ohio to New York as an aspiring art student in 1904 at a time when the impressionists were painting the usual pretty scenes, and his brilliant tutor Robert Henri at New York Art School entreated his students to “get out and about – and paint anything!” Bellows took that advice immediately and turned to subjects that no-one else would have tackled.  It was a jab at high art – he paints a picture of a model tired after posing for so long, and a charming full length portrait of the very young girl who came to collect his laundry. What the curators say is his “restless experimentalism” continued throughout his life.

He used his talents as a graphic artist to contribute illustrations to a left-wing magazine called The Masses, and confronted head-on various political issues – one drawing is a comment on the scandalous lack of preparedness on big ships for emergencies, at a time when the Titanic disaster remained raw in everyone’s mind. His shouldering of the plight of the poor including recent immigrants is seen in Forty-Two Kids, which shows a group of skinny and possibly ill-nourished children getting ready to jump into the East River for a swim.

After initially opposing World War I, Bellows turned to support the US entry into the conflict, and produced a series of depictions of atrocities attributed to the German army, including Massacre at Dinant  and lithographs akin to the gruesome series of prints poured out by Goya a century earlier.