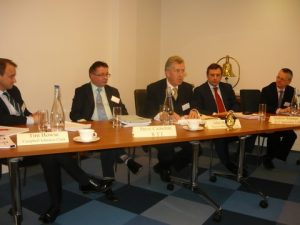 In recent years, massive incidents involving large container ships have proved extremely difficult to manage and have been followed by huge insurance claims. With even larger container vessels now coming into service, risk assessments indicate that possible consequences and necessary remedial measures can only increase in scale.

This placed a huge emphasis on ship safety for vessel owners and managers, encompassing the development of systems beyond statutory requirements and the promotion of strict safety cultures “bought into” by all shipboard employees.

This theme was echoed by the speakers at a seminar on ‘Risk Management for Shipping, Ports and Terminals, ’ held at Thomas Miller’s London offices on March 26th. It was organised by the London Shipping Law Centre—Maritime Business Forum.

Peregrine Storrs-Fox, of Thomas Miller’s TT Club, pointed to a number of recent major container  incidents. He cited the 3, 351 TEU MV Rena, which broke in two off New Zealand in October 2011, the fire aboard MSC Flaminia in July 2012 and flooding in the Emma Maersk in the Suez Canal in February 2013. It had taken six months to clear half the containers from the Rena. The Flaminia had to be towed from the mid-Atlantic to the port of Wilhelmshaven. The Emma Maersk was towed to Port Said where over 13, 000 containers had to be taken off. 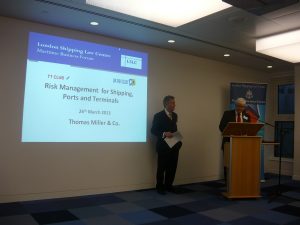 These incidents had proved extremely difficult to combat and had generated massive economic ramifications and supply chain disruption. “No port in the world can suddenly produce crane and storage capacity to handle 13, 000 unexpected containers without huge disruption to its overall operations, ” continued Mr. Storrs-Fox.

With 18, 000TEU containers coming into service, a full load, positioned end to end, would stretch for about 70 miles. Assuming 85 per cent capacity for commercial viability, each voyage would place greater demands on port and terminal facilities, particularly in relation to pilotage, tug services and loading and unloading.

This in turn would step up the extent of insurance requirements and add complexity to the associated contracts and assessing appropriate premiums. The TT Club provided extensive loss prevention advice, not least in respect of quay cranes and ships impacting berths and cranes which together had accounted for more than one-third of claims costs in recent years.

Steve Cameron, of RTI Ltd, explained that the total value of a well laden 18/20, 000 TEU could exceed $900 million. Assuming individual container contents averaging $50, 000 and an 80 per cent overall load, cargo worth $750 million could be six times the value of the ship itself.

With pressure on operating and crew costs typically reducing onboard personnel to less than 20, there was widespread concern about the difficulties of observing adequate safety standards.

Thoroughgoing risk assessment needed to be stepped up. In Mr. Cameron’s experience, many written safety systems had little to do with the real risk. The need to link safety management systems with business risk to create an overall loss management system had to be stressed. As well as rigorous procedures and random audits to check the system was being adhered to, it was essential for those on board to “buy in” to the whole approach. 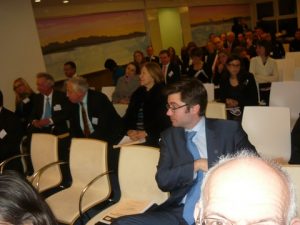 A view of the left part of the Auditorium

Mr. Cameron said that while industry audits for ports, ships and supply chain and security operations remained essential, they were not enough. He pointed out that vessels involved in major incidents all had ISM certification—-which was not as demanding as Tanker Management and Self Assessment requirements.

“Employees should hold themselves accountable to live by safety values and principles. Operators should be driven by their own performance audits. It should be all about testing people, not just ticking boxes.”

Mr. Cameron drew attention to the dangers of fatigue. Individual efficiency was bound to be reduced if people did not get enough rest. While automation reduced error, he warned that “it cannot cancel out human factors.”

Andrew Webster, a partner in JLT Specialty, explained that insurance risk in new terminal projects could be manifest in a very wide range of fields. While a project was under way, these could range from the construction process and cost overruns to protest actions and archaeological finds. Post-completion, they included risks from operations and maintenance and techonology performance and environmental considerations.

“We have to work towards seamless cover with the gaps as thin as possible.”

Finding capacity for some risks could be “quite a challenge” if adequate risk transfer mechanisms were to be realised. All owner controlled comprehensive insurance programmes needed to take account of cost control, premium savings, cargo, sabotage, terrorism, environmental protection and professional indemnity.

Between them, port authorities and terminal operators had to provide cover in relation to bridges, waterways, buoys, lights, mooring gangs, wharfs and cranes. There was a promise to provide and maintain services which the insured parties had to do their utmost to keep.

Mr. Webster felt that brokers were best placed to identify and obtain “credible risk transfer mechanisms from the markets.” 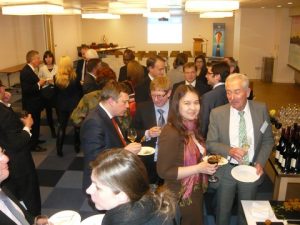 From the networking reception

Tim Howse, of Campbell Johnston Clarke, outlined the intricate web of contracts that governed relationships between ports and their users.

He reviewed the duty of care in tort, contractual frameworks, statutory and commercial provisions with a particular focus on limiting financial liability. In particular, ships enjoyed limitation protection from the 1957 and 1976 Conventions and the 1996 Protocol. 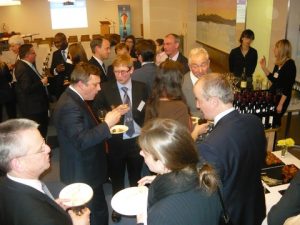 Another view from the networking reception

He pointed out that limitations provisions could cease to apply through personal acts or omissions or reckless behaviour likely to result in loss or damage. He drew attention to the Unfair Contract Terms Act 1977, whereby an “Exclusion or limitation of liability in standard business-to-business terms had to be reasonable in order to be enforceable.”

The panel was chaired by John McPhail, Compliance Officer for the UK P&I Club.  A lovely reception followed the event with drinks and excellent dips, with networking at its best!