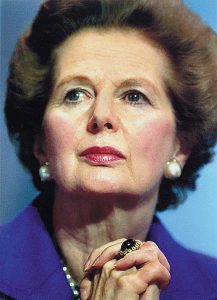 Former Prime Minister Baroness Thatcher has died “peacefully” at the age of 87 after suffering a stroke, her family has announced.

Successor David Cameron called her a “great Briton” and the Queen spoke of her sadness at the death.

Lady Thatcher was Conservative prime minister from 1979 to 1990. She was the first woman to hold the role.

She will not be accorded a state funeral, in accordance with her own wishes, Downing Street said.

Mr. Cameron, who is in Madrid for meetings, has cancelled planned talks in Paris with French President Francois Hollande and will return to the UK later on Monday.

Having been education secretary, she successfully challenged former prime minister Edward Heath for her party’s leadership in 1975 and won general elections in 1979, 1983 and 1987.

Lady Thatcher’s government privatised several state-owned industries. She was also in power when the UK went to war with Argentina over the Falkland Islands in 1982.

In a statement on the Downing Street Twitter feed, Mr Cameron said: “It was with great sadness that l learned of Lady Thatcher’s death. We’ve lost a great leader, a great prime minister and a great Briton.”

A Buckingham Palace spokesman said: “The Queen was sad to hear the news of the death of Baroness Thatcher. Her Majesty will be sending a private message of sympathy to the family.”

London Mayor Boris Johnson tweeted: “Very sad to hear of death of Baroness Thatcher. Her memory will live long after the world has forgotten the grey suits of today’s politics.”

UK Independence Party leader Nigel Farage called Lady Thatcher a “great inspiration”, adding: “Whether you loved her or hated her nobody could deny that she was a great patriot, who believed passionately in this country and her people. A towering figure in recent British and political history has passed from the stage. Our thoughts and prayers are with her family.”

Senior Conservative MP David Davis said: “Margaret Thatcher was the greatest of modern British prime ministers, and was central to the huge transformation of the whole world that took place after the fall of the Soviet Union.

“Millions of people in Britain and around the world owe her a debt of gratitude for their freedom and their quality of life, which was made possible by her courageous commitment to the principles of individual freedom and responsibility.”

SSA strengthens its call for a unified “Asian Voice”