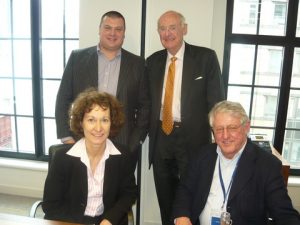 Terrifying cargo grab by Gulf of Guinea pirates might have been avoided by a modest investment in a GPS transmitter, IMIF meeting hears

Shipowners and cargo interests are facing a huge dilemma because it is very expensive to provide security guards for some of their operations off West Africa.

The answer could be to equip vessels for a very small sum of money with trackers which would stop them going ‘off the radar.’

A nasty incident in which marauders snatched a Gulf of Guinea bunker barge to steal the cargo was the focus at the latest meeting of the International Maritime Industries Forum in London.

To judge from details provided by Alex Davis, a partner with law firm Stephenson Harwood, which hosted the event, the assault caused much more harm to the crew than had been reported in brief mentions in the media. 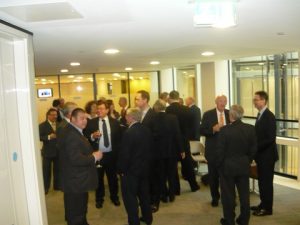 Mr Davis said that the case differed from piracy events experienced to date in the Horn of Africa.  It was highly organised and pretty terrifying. He said that the AIS signal from the British 2008-built product tanker Anuket Emerald which was used as a bunker barge disappeared one day in August 2012.

The 5, 500 gt ship had loaded 3, 400 tons of gas oil and proceeded to sea, to sit off Lomé in Togo awaiting orders. After nine days at sea, all was quiet, then four men armed with an AK47 and another with a home-made shotgun sprang through a doorway. The crew had no time to press the ship security alert. The Ukrainian and Russian officers were beaten badly, although the Filipino crew were more or less left alone after the initial intimidation. The pirates had brought with them a cocktail of drugs and spirits, and things turned nasty pretty quickly. Bullets were scattered everywhere.  When the bosun tried to hide, the door was smashed open. 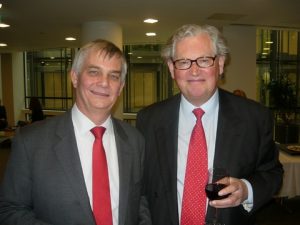 While high on drugs, one of the pirates discharged a firearm, making a hole in the deck.

An accomplice vessel came alongside to make a ship to ship transfer of the cargo – those who arrived with it knew how to pump a vessel and within three days the cargo was gone. This marked an escalation in that the intruders on board had belt-fed machine guns, looking as if they would have been ready to defend their position, rather than just run if foreign naval forces came. Almost every pirate had a gun, and there were metal ladders for boarding. “It was a well oiled machine for an operation, with considerable levels of sophistication, ” said Mr Davis.

The bandit vessel discharged at a jetty at Lagos. The Nigerian authorities seized the cargo at the tank farm and the owner of the tank farm was arrested.  The cargo languishes in the tank farm while talks takes place. 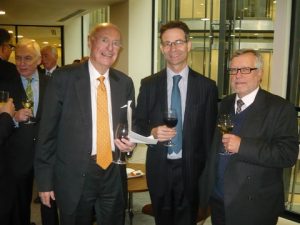 Mr Davis spoke of chemical ‘finger printing’ which could prove a stem of oil was one that had been seized. “If we can get the oil back, I believe it would be the first time it has ever been done, ” he said.

Referring to ways to combat such cargo thefts, Mr Davis spoke of GPS transmitters that these days were very small and have their own lithium power packs, and which could be hidden anywhere in the vessel. If one had been in place, “we would have had a fix on the vessel the whole time.” It was a cheap solution and might have enabled the illegally operated vessel to be arrested before it discharged.

The question was whether there was a will to buy such equipment. Could charterers oblige the owners to install it? The kit cost only around £200.

Armed guards were unviable in circumstances such as that of a small product tanker bobbing around off the coast of Togo while waiting 10 or 20 days for orders. “The solution is to cut the problem off at source, prevent these guys from landing the cargo and making the money, ” said Mr Davis.

Earlier in the IMIF session, John Dalby, founder and chief executive of Marine Risk Management, and co-founder of the International Association of Maritime Security Professionals, a security industry regulatory association, said that the Indian Ocean piracy situation was diminishing, and now that governments were taking a more active interest in the Somali hinterland and its natural resources, the geopolitical scene was changing.  “How long that lasts, remains to be seen.” 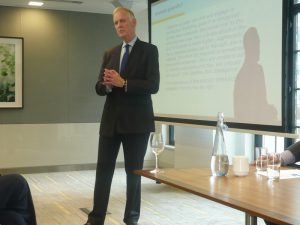 David Wardrop quoted a statement by Henry Bellingham, as minister for Africa, to the UK Chamber of Shipping in October 2011 that “the government has decided to commit £2m to community engagement and economic development projects in coastal regions.”

We were now seeing a resurgence of piracy in southeast Asia, a strategy of seizing ships and cargoes, no ransoming, no hijacking, and with scant concern for the lives of crew members.

Various parties, governments, shipowners, had spent billions of dollars on counter-piracy measures… to stop what: to stop a few hundred million dollars worth of ransom and hijacking claims, said Capt Dalby.  “The numbers just do not stack up.”

In West Africa and notably the Niger Delta the longstanding (of at least 40 years!) petty theft had escalated to a more serious level. In the ‘good old days’ these inappropriately labelled ‘pirates’ would steal tins of paint, the odd mooring rope and wire, empty the ship’s safe and rarely harm crew members. Now, there was a growing tendency to use violence, and cargoes themselves are now being targeted – following the southeast Asia model.

From the audience, David Wardrop of Westminster branch of the United Nations Association, claimed that the UK Foreign Office and EU Naval Force (EU Navfor) were ‘dysfunctional’ in their approach to the problem of piracy. “The British government, our ministries, have failed you, the shipping community, ” he said.

More than a year after the February 23 2012 anti-piracy summit in London hosted by David Cameron, Mr Wardrop questioned whether anything had moved forward. The conference brought together 55 nations and international organisations, with the UN-backed transitional government, the then US secretary of state Hillary Clinton, and UN secretary general Ban Ki-moon. Mr Cameron had described the talks as a stage on a journey of opportunity for change in Somalia. 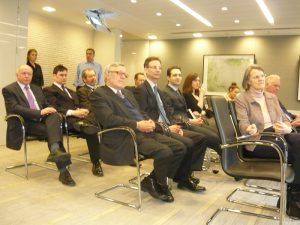 Mr Wardrop, who mentors a Somali diaspora group, had sought to identify any cohesive strategy on piracy being pursued by the international community, especially the UK government. The UK diaspora-based organisation he assists is known as World G18 Somalia, and seeks to engage communities which tolerate pirate groups, offering them the option of a better ‘quality of life.’

Mr Wardrop quoted a statement by Henry Bellingham, as minister for Africa, to the UK Chamber of Shipping in October 2011 that “the government has decided to commit £2m to community engagement and economic development projects in coastal regions.”  When Mr Wardrop and Somali colleagues tested this at a meeting with Foreign Office and International Development Department officers, seeking £10, 000 for a pilot project in six pirate-base villages, they were rejected  and told the £2m had been allocated to a United Nations Development project. Investigations showed that this programme would benefit coastal communities only marginally.

Jim Davis, chairman of IMIF, said of the spread of piracy: “We could easily have gone on for hours debating this. We have a problem, we cannot sleep on it. It is one of the extreme problems that the world is facing, and some people are suffering appallingly. Things are very serious and could be getting worse.”