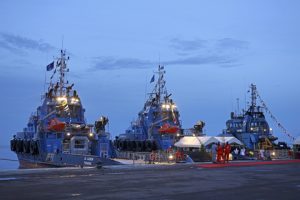 A welcoming ceremony was held for two newbuild vessels SL Gabon and SL Libreville at Port‐Gentil, Gabon on 17 April. 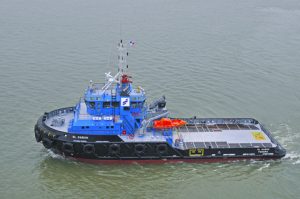 SL Gabon and SL Libreville have been contracted for a five year period by Total Gabon. The vessels will support offshore oilfield activities and tanker operations at the terminal of Cap Lopez, Port‐ Gentil.

“The partnership between our two organisations has roots reaching back 30 years, ” says Mr Koornneef. “Port‐Gentil’s location demands robust and reliable marine support services. We are delighted to bring these two state of the art tugs into service for Total Gabon, signifying our continuing commitment to invest in the future of Gabon.” 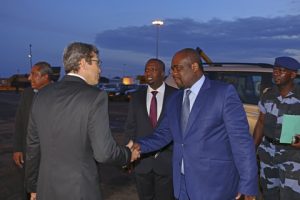 Smit Lamnalco now operates five vessels for Total Gabon, has a further four vessels under contract for Shell at its Gamba terminal and manages one vessel for Perenco.

The marine support company praised the performance of its 179 Port‐Gentil‐based staff, 75% of whom are Gabon nationals. Special mention was made of Master Jean‐David Mpaga who has been sailing with the company for over 30 years.

Smit Lamnalco is the leading provider of safe and efficient towage and associated marine services to the oil and gas terminal industry. With more than 190 vessels and over 3, 000 staff worldwide, Smit Lamnalco is dedicated to providing marine support services tailored to the operational needs of global customers in local markets. Active in over 30 countries, Smit Lamnalco specialises in bringing international standards on safety, logistics, mooring and towage to onshore and offshore operations in challenging environments.