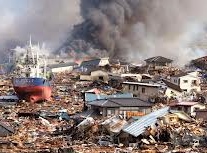 From the latest Japanese disaster

Two major disasters in 2011 revealed just how vulnerable many organisations’ supply chains can be. The Tohoku Earthquake and Tsunami, followed later in the year by the flooding in Thailand, revealed some of the pitfalls of lean manufacturing processes such as just-in-time where components are made to order with little surplus or stockpiling.

The combined property and business interruption losses reached a record-breaking $240bn, with just $47bn of the losses covered by insurance, according to Swiss Re Sigma.

The most highly impacted industries were electronics (with Japan the sole source for certain batteries and flash memory), semiconductors and key parts in automotive production.

“What people forget is the supply chain now is a global network and that’s why there really is a need to get into quite a lot of analytics to understand what the pinch points are, ” says Tom Teixeira, a partner in the global solutions consulting group at Willis.

Despite the devastation caused by the earthquake and the tsunami, one of the key characteristics in the aftermath of ToHoku was non-damage business interruption.

Factories that had escaped the worst of the magnitude 9.0 quake were prevented from operating normally by power outages or the inability to move workers in and out of the site.

The level seven meltdowns at the Fukushima reactor, which was flooded by the tsunami, compounded the disruption to businesses in Japan and the supply chains they serve.

A paint plant near the nuclear facility that made a unique pigment ceased production. This was a severe blow to car manufacturers in several countries who were unable to customise ordered vehicles due to the lack of the specific black paint dye.

Toyota announced closures of all of its North American factories and General Motors temporarily shut down a plant in Louisiana due to shortages of parts.

In total, more than a quarter of large US-based businesses experienced supply chain disruptions – or contingent business interruption (CBI) – after the disaster in Japan, according to a study by Greenwich Associates. The same study found that 70% of businesses had no specific protection against issues related to nuclear contamination.

Teixeira explains that many of the non-damage losses were, typically, not insured. “There were a number of companies that thought they had insurance cover in place for supply-chain interruption, which we call CBI, but that only came into effect if there was property damage at the supplier side.

“If it was a case of not being able to ship the workers in, or there was no power reaching the supplier site, there was no cover and these companies faced a considerable loss.”

“That’s why there is more and more interest being generated around products appearing in the market that are standalone supply chain products – they cover non-damage business interruption scenarios as well, ” he continues.

“They would cover scenarios like ingress egress – if there is a nuclear exclusion zone set up and workers cannot get in or get out and that affects the end-customer – you can in theory get cover for that.”

A big issue for many companies to resolve has been communication between the procurement and risk management departments. Relying on single suppliers and using just-in-time manufacturing techniques can help keep costs down, but it also increases supply chain exposure.

Choosing to locate manufacturing premises in a region prone to flooding because the country offers cheap labour and low overheads can also potentially be a mistake, explains Teixeira. “Sometimes companies forget to consider issues around political or geopolitical risk or even natural catastrophe – there’s capability there and a skilled workforce and they’re cheap – in many cases they don’t consider the risk scenarios.”

Since 2011, however, there are growing signs that global supply chains are becoming more resilient, although there is still room for improvement, thinks Teixeira. “Certain companies in certain sectors are getting their act together. In some instances, up to 80% of the key suppliers for major electronics manufacturers are now dual-sourced for instance.”

“We are also working with companies in the IP sector that are building what we call global supply chain databases whereby you can put part numbers in and the database will throw out the exact location of where that part is being manufactured, ” he continues. “That is improving the overall risk assessment capability.”

As production networks and supply chains become increasingly globalised, localised incidents can have a number of major effects on every level of business at home and abroad – from manufacture to distribution to sales. Here, we can see how the 2011 flooding in Thailand had serious consequences for international industry, and provided considerable food for thought for the insurance sector. 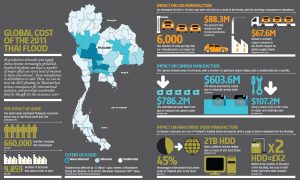 Police in force at Vancouver port