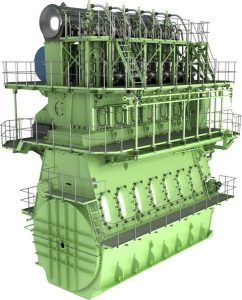 STX Offshore & Shipbuilding announced on April 8, 2013 that it had signed a contract to build four 113, 000-dwt Long Range 2 (LR2) product tankers for Teekay Tankers Ltd. (Teekay Tankers), with an option for up to an additional 12 vessels. Each newbuilding will be powered by an MAN B&W G60ME-C engine and will satisfy IMO environmental standards as well as the shipowners’ demand for fuel efficiency. The four confirmed vessels will be constructed at Jinhae shipyard in Changwon, South Korea, with delivery scheduled from the second half of 2015.

MAN Diesel & Turbo reports having close to 200 G-type engines on order, spread over a broad spectrum of applications, and states that it has the fastest market acceptance any engine series in the MAN B&W portfolio has ever received.

With bunker prices having increased by over 500% since 1999, a rise that is set to continue, as well as the impending arrival of even stricter environmental legislation, the adoption of the G-type as prime mover for its tankers is a deliberate move by Teekay Tankers. “With their fuel-efficient design, which is estimated to result in 20 to 30 percent fuel savings compared to current vessels in the existing LR2 fleet, we believe these newbuildings will be very attractive to our customers, ” comment Bruce Chan, Teekay Tankers’ Chief Executive Officer.

MAN Diesel & Turbo’s G-type programme entered the market in October 2010 with the entry of the G80ME-C9 model. The company subsequently expanded the ultra-long-stroke programme in May 2011 with the addition of G70ME-C9, G60ME-C9, G50ME-B9, G45ME-B9 and G40ME-B9 models. The G-types have designs that follow the principles of the large-bore, Mark 9 engine series that MAN Diesel & Turbo introduced in 2006. Their longer stroke reduces engine speed, thereby paving the way for ship designs with unprecedented high-efficiency.

The G80’s longer stroke results in a lower rpm for the engine driving the propeller: a reduction from 78 rpm for the S80 engine to 68 rpm for the G80. This lower optimum engine speed allows the use of a larger propeller and is, ultimately, significantly more efficient in terms of engine propulsion. Together with an optimised engine design, this reduces fuel consumption and reduces CO2 emissions.

Teekay Tankers currently owns a fleet of 31 double-hull vessels, including 11 Aframax tankers, 10 Suezmax tankers, seven Long Range 2 (LR2) product tankers (including four committed newbuildings), three Medium-Range (MR) product tankers, and has time-chartered in two Aframax tankers. Teekay Corporation (NYSE:TK) manages these vessels through a mix of short- or medium-term fixed-rate time-charter contracts and spot tanker market trading. The Company also owns a VLCC newbuilding through a 50 percent joint venture, which is scheduled to deliver in the second quarter of 2013. Teekay Tankers was formed in December 2007 by Teekay Corporation as part of its strategy to expand its conventional oil tanker business.

MAN Diesel & Turbo SE, based in Augsburg, Germany, is the world’s leading provider of large-bore diesel engines and turbomachinery for marine and stationary applications. It designs two-stroke and four-stroke engines that are manufactured both by the company and by its licensees. The engines have power outputs ranging from 450 kW to 87 MW. MAN Diesel & Turbo also designs and manufactures gas turbines of up to 50 MW, steam turbines of up to 150 MW and compressors with volume flows of up to 1.5 million m³/h and pressures of up to 1, 000 bar. The product range is rounded off by turbochargers, propellers, gas engines and chemical reactors. MAN Diesel & Turbo’s range of goods includes complete marine propulsion systems, turbomachinery units for the oil & gas as well as the process industries and turnkey power plants. Customers receive worldwide after-sales services marketed under the MAN PrimeServ brand. The company employs around 15, 000 staff at more than 100 international sites, primarily in Germany, Denmark, France, Switzerland, the Czech Republic, India and China. MAN Diesel & Turbo is a company in the Power Engineering business area of MAN SE.

All data provided in this press release is for information purposes only, explicitly non-binding and subject to changes without further notice.