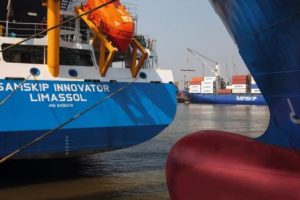 Samskip Multimodal is pleased to announce that as of May 14 (today) it will replace the 340 TEU Veritas H with the 803 TEU Henrike Schepers on its Netherlands-UK services into Hull.

As well as increased capacity, Samskip Multimodal customers will benefit from reduced transit times and extended cut off times in both Hull and Tilbury.

With five sailings per week, Samskip Multimodal is able to deliver cargoes anywhere in the UK within two days of their departure from Rotterdam. Deployment of Henrike Schepers has also made possible the addition of a Wednesday evening Rotterdam departure, allowing for Thursday afternoon pick-ups in Hull and for Friday deliveries throughout the UK.

Samskip operates one of Europe’s largest multimodal container logistics systems. The Samskip system is able to move containers door-to-door between over 30 countries from the United Kingdom and Ireland to Russia, Scandinavia, Poland, the Baltic States, Finland and Iceland in the north to Spain, Portugal, Italy, Austria, Greece, Hungary, Czech Republic and Slovakia in the south and centre of Europe.

Samskip offers a wide range of routing options, utilising road, rail, sea and inland waterways as appropriate to provide the best combination of rate and transit time to suit individual customers’ requirements and preferences. It now has at its disposal over 13, 000 containers, ranging from 20ft to 45ft pallet-wide high cube containers including reefers, curtain-siders and flat-racks.