UK – 21 May 2013 – Reigning Match Racing World Champion and Skipper of Team GAC Pindar Ian Williams has secured victory in the first regatta of the season at Match Race Germany.

Ian was in great form all weekend, having topped the round-robin qualifiers and then showing real grit to come back from an overnight 2-1 deficit to clinch his place in the final with a 3-2 win over Stena’s Johnie Berntsson, before taking what proved to be a decisive lead in the Final.

Speaking after being presented with the winning trophy at Lake Constance, Ian Williams admitted that it had been a challenging regatta and a hard win. Williams commented: “Winning here in Germany is a great achievement for me and Team GAC Pindar. I’ve never managed a win here on the World Match Race Tour, so it’s a great feeling. The mixed conditions made it a really challenging few days. We’ve had very strong and very light winds; sunshine and heavy rain plus seriously choppy waters. We had to be at our best to secure the title, particularly given the tough competition. We also had two new guys standing in on the team for this event, Graeme Spence and Willem Van Waay, and they both did a great job. This result sets us up perfectly for the season ahead and for the Korea Match Cup in a week’s time.”

Andrew Pindar, Team Principal of Team GAC Pindar, added: “This is a brilliant start to the season and hopefully a great sign of things to come as Ian continues his bid to secure a historic fifth World Championship crown. We all saw the depth of quality in the field in this season’s tour and how narrow the margins of victory can be, so we’ll enjoy this victory but are already focused on the final preparations for the Korea Match Cup.”

The next ALPARI World Match Racing Tour (AWMRT) regatta takes place between May 28 and June 3 at the Jeongok Marina in Gyeonggi-do, South Korea. 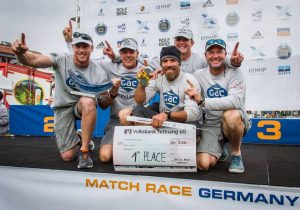 The AWMRT is the world’s leading professional sailing series featuring world-class Championship events across the globe, with six stops on this year’s calendar across three continents. Every match race is a duel between two identically matched boats, creating close, aggressive competition, thrilling viewing and some of the most exciting action in world sport.

For more information about Team GAC Pindar, please visit the team website at www.gacpindar.com and Facebook page atwww.facebook.com/teamgacpindar and follow them on Twitter at www.twitter.com/gacpindar. To find out more about the ALPARI World Match Racing Tour, go to http://www.wmrt.com.