With the spotlight on volunteers, HELMEPA begins its environmental campaign on the island of Rhodes

In the presence of local government and Coast Guard representatives, volunteer groups, teachers, students and environmentally conscious members of the local community, HELMEPA began its “Marine Environment and Sciences Awareness Campaign” on the island of Rhodes, under the auspices of the Municipality. The campaign began its tour of 12 cities across Greece in 2012, with the support of Lloyd’s Register Foundation* (LRF). 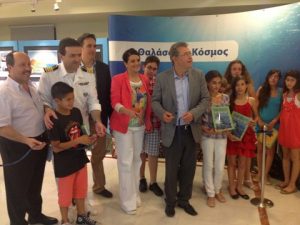 The inauguration of the Exhibition (from left to right): Mr. N. Fronas/Chairman of the Modern Greek Art Museum, Captain G. Seferiadis/Central Harbour Master of Rhodes, Mr. C. Triantafillou/HELMEPA’s Environmental Awareness Section, Ms. A. Hadjinikita-Kampouri/Director of the Volunteer Office of Rhodes, Mr. S. Kousournas/Mayor of Rhodes and the award-winning students.

The Campaign at Rhodes opened on Monday, 20th May at the Modern Greek Art Museum “Nestorideion Melathron” Gallery with a Workshop on marine litter and an Exhibition. Among other pertinent issues broached during the Workshop, the emphasis placed on the important role of volunteers in the protection of the Dodecanese marine environment was also discussed.

In opening the Workshop, Mayor of the island of Rhodes, Mr. S. Kousournas, referred to the current “hot” environmental concerns relevant to the island and thanked HELMEPA for including Rhodes in its campaign. “With its multidimensional endeavours, HELMEPA”, he commented, “sets a benchmark for the improvement of the current environmental status through accurate information and updates and by enhancing the awareness and bolstering the active engagement of all, especially of the younger generations.”

During his address, the Rhodes Central Harbour Master and HELMEPA member, Captain (HCG) G. Seferiadis, spoke about the vital importance of the marine environment for our country, the need for its effective protection and the efforts of HELMEPA throughout its 31 years towards environmental updating and heightening awareness throughout shipping.

Speaking on behalf of HELMEPA, Mr. C. Triantafillou, from the Association’s Environmental Awareness Section brought the formalities of the speeches to a close, thanking the Municipality of the island of Rhodes and its Volunteer Office, as well as the educational community of the island, which supports the “HELMEPA Junior” Program. 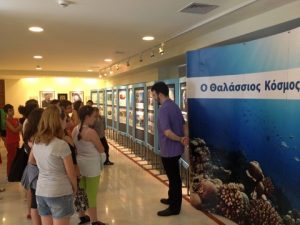 Students being led on guided tours through the Exhibition.

A series of presentations followed, by HELMEPA on sea and coastal pollution both throughout Greece and on a global scale, by the Municipality on waste management in Rhodes, by the Hellenic Center for Marine Research’s Hydrobiological Station of Rhodes on the current situation in the Mediterranean and by the Directors of Dodecanese Primary and Secondary Education on school’s activities for pollution prevention.

Images shown by volunteer divers from the islands of Rhodes and Patmos from underwater clean-ups made a particular impression on all those present, as did their driving factors but also the difficulties they confront in carrying out their work.

Following the conclusion of the Workshop, the Exhibition titled “The Marine Environment, Shipping, Sciences and Engineering” was inaugurated by the Mayor and the Harbour Master of Rhodes, together with the Chairman of the Modern Greek art Museum and the Director of the Municipal Volunteer’s Office. The Exhibit will remain in Rhodes until 5th June.

The first of the scheduled student visits to the Exhibition began on Tuesday, 21st May, with the total number of visitors estimated to reach 1, 200 Primary school students from all over the island of Rhodes. The transportation costs for 700 students are covered by the campaign budget. Given the enthusiasm with which the campaign has been met in previous cities visited, however, the campaign has been extended with the Exhibition to remain on the island of Rhodes for a further 5 days, with additional costs covered by HELMEPA. This will give an extra 500 students the opportunity to visit the Exhibition. 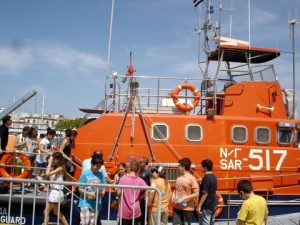 Students disembarking from the HCG lifeboat. 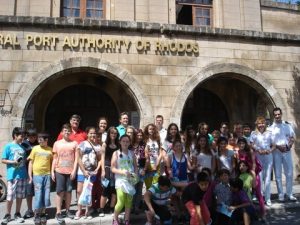 Educational visit to the Central Port Authority of Rhodes by “HELMEPA Junior” members.

Furthermore, various volunteer and educational activities have been organised, such as the visit of “HELMEPA Junior” children-members and their teachers from the 6th Primary School of Rhodes to the Central Port Authority where they were updated on the activities of the Coast Guard and its role in the protection of the marine environment. The students then had the opportunity to board both a Coast Guard lifeboat and patrol boat and were informed on the contemporary technological means utilized by them.

Lloyd’s Register Foundation supports the advancement of engineering-related education, and funds research and development that enhances safety of life at sea, on land and in the air