Life is getting tougher for Bulker masters 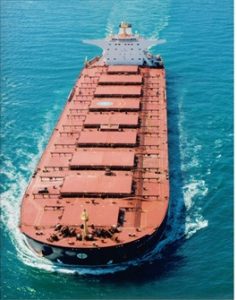 Life is getting tougher for Bulker masters

A testing time lies ahead for bulk carrier operations as increasing layers of regulation impinge more heavily on commercial viability. Safety and environmental regulations had a major role in principle and often in practice but were becoming increasingly onerous.

Further, the ambivalent attitudes of some owners and port authorities were making life increasingly difficult for masters, officers and crew.

This was the gist of the views expressed at a seminar on bulk safety issues, organised by the London Shipping Law Centre—Maritime Business Forum at Squire Sanders London offices on May 30th. The panellists were Martin Crawford-Brunt of Den Norske Veritas, Rob Lomas of Intercargo, Mark Rawson of Zodiac Maritime Agencies and Neale Rodrigues of Britannia P&I Club. Graham Harris of Squire Sanders and LSLC Director Roger Holt chaired the proceedings.

There was currently an oversupply of bulkers with over 1, 000 deliveries in both 2011 and 2012. Newbuilds had been ordered when the industry was making money. Now it was not and new vessel orders were tailing off.

Safety and environmental considerations put increasing pressure on shipboard personnel to note, change procedures, implement and test more and more items—-sometimes via sophisticated and expensive equipment. Testing iron ore fines and nickel ore for their permissible Transportable Moisture Limits was sound in principle but sometimes flawed in practice. Tougher rules for disposing of cargo residues and hold wash water were an extra burden.

Masters were increasingly faced with “no win” dilemmas, their safety treated with cavalier disregard by some port authorities and owners.

With many operators desperate for work, ports and terminals have been in a stronger position to insist on imposing tight conditions on loading and unloading, generally aimed at fast turnaround.

A master’s right to halt loading or unloading for safety aspects concerning cargo or operations was often little more than theoretical. Some authorities would take a hard line even where shore facilities had caused damage and find ways of charging for delays. Some owners, perhaps half a world away, could be intolerant of delays for any reason.

Such was the volume of new rules and regulations that some situations were characterised by a lack of awareness about them on the part of both port and shipboard personnel.

At the same time, shipboard people were faced with the familiar problem of being supplied by shippers with documentation for the goods and materials being loaded ranging from reasonably accurate to woefully inadequate.

The net result was that some ships went back to sea with safety levels lower than they should have been.