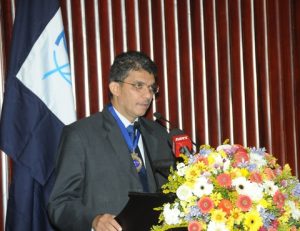 03.06.13 – The Nautical Institute took its AGM to South Asia for the first time on 31 May and 1 June in Colombo, Sri Lanka, with its theme the challenges facing maritime administrations. Speakers and delegates highlighted the need to devise and promote best practice to encourage development of regulation that is realistic, practical and that can be complied with readily. It was concluded that a key to achieving this is the recruitment and retention of capable maritime professionals as marine administrators and this requires competitive salary and career advancement structures to be in place.

Promulgating best practice is central to The Nautical Institute’s work. The AGM heard the first report of the Executive Board of Trustees elected by Council under new governance rules introduced last year. This recorded continuing progress towards meeting key objectives identified by members to improve the competency of seafarers and standards of seamanship. Sharing of knowledge and the raising of professional standards were seen as benefits to the maritime industry and society in general by improving safety and protection of the marine environment.

Practical steps have already been taken towards this with the launch of the free publication The Navigator in association with the Royal Institute of Navigation; the creation of an online scheme for continuing professional development (CPD) for Institute members due to be launched later in June and a series of seminars to encourage the reintroduction of mentoring onboard following the publication of Mentoring at Sea – the 10 minute challenge by Captain André Le Goubin FNI.

CPD Online will be launched by The Nautical Institute in June and is designed to meet the needs of individual members, allowing them to formally plan for their future maritime career at sea or ashore and establish goals to improve performance. It will enable maritime professionals to take control of their own learning and development and demonstrate their professional commitment.

Mentoring was identified by the Institute’s President, Captain Sivaraman (Krish) Krishnamurthi FNI, on his election in July 2012 as “a means of raising competence and driving up professional standards, both at sea and ashore.” All members are now being encouraged to take the 10 minute mentoring challenge and, starting in 2013, all of the Institute’s 50 Branches are being encouraged to hold mentoring workshops.

Looking ahead to 2014, the Command seminar series to be held throughout the year will take as its theme navigational competence.

Speaking at the AGM, Captain James Robinson DSM FNI Irish Navy (Retired), immediate past President and Chairman of the Executive Board, pointed out that the change in the Institute’s membership structure and criteria approved in 2010 was to “encourage a more inclusive meeting of minds to address the issues of today and the future” and that “many members are acknowledged experts in their fields and work for maritime administrations around the world.” Several speakers expressed the view that self-regulation based on best practice was a more constructive way forward than enforcement of a prescriptive regulatory regime.

In his presidential address, Captain Krishnamurthi commended the initiatives already in place for developing and disseminating best practice and outlined his ambitions for the coming year. He called upon members to get involved in promoting the mentoring campaign for the benefit of the industry.

The Institute would continue to identify existing and emerging best industry practices, he pledged, and would establish a “sustained programme” to influence public perception of the maritime profession. Membership of the Institute was, he added, “competency value added”.

The Nautical Institute is the international professional body for qualified seafarers and others with an interest in nautical matters. It provides a wide range of services to enhance the professional standing and knowledge of members who are drawn from all sectors of the maritime world. Founded in 1972, it has over 50 Branches world-wide and some 7, 000 members in over 110 countries.

In 2012, it was the proud recipient of the Training Award for its range of human element video clips at the Lloyd’s List Global Awards.