Undaunted: the ‘football priest’ who was cold-shouldered by the Roman Catholic Church whose clergy he left in search of love 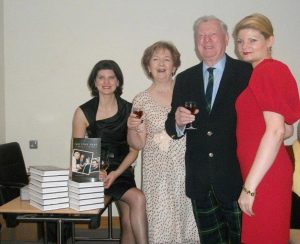 The Dublin book launch with Louise and Martin Gordon, and daughters Katherine and Victoria

Undaunted: the ‘football priest’ who was cold-shouldered by the Roman Catholic Church he left in search of love,  By James Brewer

Doris Day was a great favourite of students at a Dublin religious college in 1958. They delighted in her rendition of songs including Secret Love, and played the record so many times that the irritated rector scolded their prefect with the outburst: “No love here!”

That exclamation sums up a big problem for the Roman Catholic Church that has led to many scandals and much distress, with abuse and illicit relationships conducted by priests and even bishops coming to light.  The church has been “seen to condone lust but to condemn love, ” according to a former priest, Martin Gordon. 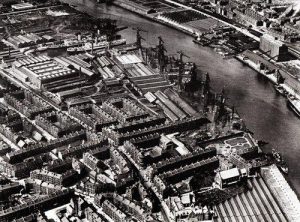 Mr Gordon has taken the rector’s admonition as the first part of the title for his frank and revealing autobiography No Love Here: A Priest’s Journey.  As much as a personal story, he has written an insightful slice of social history – whether he is writing about shipyards or seminaries.

Martin Gordon as a priest

After years of becoming increasingly frustrated at the Church’s insistence on celibacy for its ministers, Mr Gordon took the grave step of resigning holy orders. He was to learn more about the greed and hypocrisy of some bishops, and he would not find much ‘love’ in the double-dealing world of business. He recounts how he was swindled out of his returns from one deal, leaving him in such straits that he lost his home. Despite all odds, he has kept faith with his mission to serve the Church, in which he possesses irrepressible credence.

It is a loyalty exemplified by the picture on the front cover of his book. This shows Mr Gordon and his wife Louise meeting Pope John Paul II in February 1982.  The audience is not written about in the book, but in fact Archbishop Jacques Martin, head of the papal household, had arranged for Mr Gordon to present a copy of the magazine he had produced ahead of the Pope’s visit to the UK.  Neither of the two leading figures knew of the author’s clerical background. 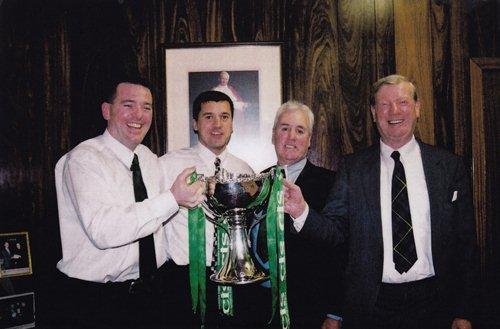 Martin Gordon was born in 1931 in Glasgow, “in the shadow of a Fairfield crane, ” echoing the words of the poet Archie Fisher in the song The Shipyard Apprentice. His father had fled the family farm, in the aftermath of Ireland’s civil war, to sail by cattle ship from Sligo to Glasgow to stay with his half-brother. Tom Gordon took up work at the shipyard, but his son never had any desire to become a welder there.

All the same, the bustle of Govan’s three shipyards and the sight of ocean-going ships gliding along the Clyde captivated the young Martin. In 1938, John Brown’s launched the magnificent Queen Mary, and the following year, the yards began working feverishly to support the war effort of the Royal Navy and merchant shipping. Glasgow was an enemy target andHMS Sussex, berthed across the water from Govan, was hit. Navy men and firefighters only just prevented the blaze reaching the ammunition magazines, which would have led to many civilian casualties. The Govan vehicle ferry was used as a fire boat for this operation, in which the carrier was sunk – the entire incident being kept secret from most of the public until long after the war ended. 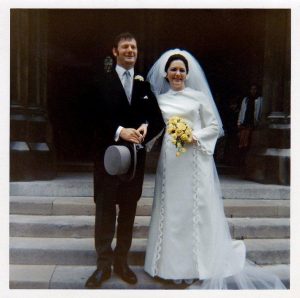 Martin and Louise Gordon at their wedding in 1971

At the end of the war, Martin’s father sent him to stay on the family farm in Sligo, and a little later he felt the impulse to become a priest, for which he began 10 years of study in 1950. Ordained in 1960, Mr Gordon was sent to a London parish where his duties included being chaplain to the Royal Free Hospital, and this was when he became known as “the football priest.” He was called to a dying man with whom he used to talk soccer – “we never once got on to the subject of religion.”

He was also Catholic Stage Guild chaplain to Sadler’s Wells, which was close to his church, although canon law prohibited the clergy from attending operas. Such company made him ponder all the more over the lonely life of a celibate priest, and eroded his commitment to the calling. Among the influences were the repressed feelings he had for a childhood sweetheart in Dublin. He cites Samuel Johnson: “Marriage has many pains, but celibacy has no pleasures.”

In 1966 he gave up the priesthood, only to meet hostility from the church hierarchy, although individual priests were sympathetic. The provincial superior followed the instructions of the founder of the Pallottine Fathers: “Members are to have nothing to do with priests who have left the society for a woman.” The Pallottines take inspiration from St Vincent Pallotti, working in partnership with laity “furthering the Church’s mission to renew faith and rekindle love.” While Mr Gordon did not leave because of a particular woman, he was still, he says, ostracised.

Mr Gordon writes passionately about the “hypocrisy rampant within the ranks of the Catholic priesthood.” The temptation for priests is to remain in office, despite being unable to acquiesce in the condition of chastity, because the challenges of leaving the comfort zone are considerable. Mr Gordon took a clerical job in a supermarket but that made him even more depressed, and understand why so many priests are reluctant to leave the security of the priesthood.

Mr Gordon writes: “For years our seminary priests had warned us about [women]. They were dangerous creatures and to be avoided like the plague. But all around me now were these alluring creatures holding out the apple for me to bite. But it took four years before I could resist no longer and fell for the charms of the woman who is now my wife.” He married Louise Kinmonth, a beautician from Cork whom he met in the Irish Club in London, after Rome granted him a dispensation from his vow of celibacy and ‘reduced’ him to lay status. They now have three grown-up children.

As a layman, Mr Gordon began to have exciting times, including working for the entertainment business of Eamonn Andrews in Ireland. Fired from that post, he left for London and became sales director of a printing company, one of whose founding directors was Bill Brown, Scotland and Tottenham Hotspur goalkeeper.  This was one of many footballing connections throughout his life – he got to know Sir Alex Ferguson (1986-2013 manager Manchester United) in the west of Ireland several years ago, and was great friends with George Graham (Scottish player and Arsenal manager) and former England manager and player Terry Venables. 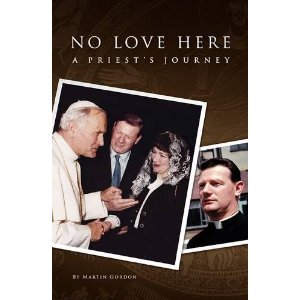 Moving to Cork, he became a part-time impesario bringing quality acts to the city, but fell victim to a tickets fraud. Back in London he launched a commemorative magazine for the 1979 papal visit to Ireland, which was a tremendous success but he was, he says, cheated out of his share of profits.

“One thing I didn’t learn in the seminary was that in business men are unscrupulous. Even in the confessional I had not met such evil as I was to come across in my business life, ” he says. Back in Ireland, he was an embarrassment to most of the local clergy. He became a freemason and says: “In freemasonry I have met more companionship and friendliness than I ever met with in the priesthood.”

He does not foresee a relaxation of the church’s position on mandatory celibacy. He surmises that Pope Francis will address the problem, but is doubtful if change will occur. “Yet, he is a man of surprises.  I see from Facebook that he has already impressed many outside of the Catholic Church, ” says Mr Gordon.

No Love Here – A Priest’s Journey by Martin Gordon can be purchased from Amazon or from the website:authormartingordon.com

The World and Shipping: Turbulent times ahead