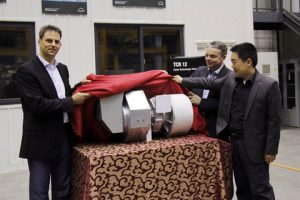 Over the last two decades, the level of shipbuilding activity in China has increased dramatically, resulting in the country being ranked as the top shipbuilding nation globally for the first time in 2010. As the leading supplier of turbochargers for marine diesel-engine manufacturers in China, MAN Diesel & Turbo has continuously contributed to this rapid development and had already established a local set-up in Shanghai in 2002. Initially acting as an assembly workshop for axial turbochargers, MAN subsequently localised component production over the years. In time, the Shanghai factory became too small and, in 2011, the turbocharger workshop was moved to the existing plant in Changzhou.

About MAN Diesel & Turbo
MAN Diesel & Turbo SE, based in Augsburg, Germany, is the world’s leading provider of large-bore diesel engines and turbomachinery for marine and stationary applications. It designs two-stroke and four-stroke engines that are manufactured both by the company and by its licensees. The engines have power outputs ranging from 450 kW to 87 MW. MAN Diesel & Turbo also designs and manufactures gas turbines of up to 50 MW, steam turbines of up to 150 MW and compressors with volume flows of up to 1.5 million m³/h and pressures of up to 1, 000 bar. The product range is rounded off by turbochargers, propellers, gas engines and chemical reactors. MAN Diesel & Turbo’s range of goods includes complete marine propulsion systems, turbomachinery units for the oil & gas as well as the process industries and turnkey power plants. Customers receive worldwide after-sales services marketed under the MAN PrimeServ brand. The company employs around 15, 000 staff at more than 100 international sites, primarily in Germany, Denmark, France, Switzerland, the Czech Republic, India and China. MAN Diesel & Turbo is a company in the Power Engineering business area of MAN SE.
Ref. No.: 6510-0320
All data provided in this press release is for information purposes only, explicitly non-binding and subject to changes without further notice.