Francis King, a member of one of the great British press dynasties, spent much of his life in the publishing business, even after he was dismayed to discover that he was allergic to newspaper ink. In his later years, he campaigned to advance health provision for people with mental disabilities in the borough where he lived, Richmond-upon-Thames.

Mr King – full name Cecil Francis Harmsworth King – died on April 25 2013, age 85. His father Cecil Harmsworth King (1901 – 1987) was a controversial figure who chaired Daily Mirror Newspapers,  Sunday Pictorial Newspapers and the International Publishing Corporation (1963-68), and was a director of the Bank of England for three years. After Cecil King and others were involved in 1968 in secret discussions aimed at replacing the government of Harold Wilson with a businessmen’s coalition led by Lord Mountbatten, he was dismissed from IPC.

Francis King was the grandson of Sir Lucas White King and his wife Geraldine née Harmsworth. Geraldine was one of 11 children of a barrister, Alfred Harmsworth (1837-1889). Alfred’s son Alfred Charles William, born in County Dublin, became Viscount Northcliffe, a newspaper tycoon who amassed huge press power with his titles including the Daily Mail,  Daily Mirror, the Times, andSunday Times.

Thus Francis had as his great-uncles Lord Northcliffe and Lord Rothermere (Harold Sidney Harmsworth), two of the greatest proprietors in the newspaper world. Francis’s father Cecil, in close association with Hugh Cudlipp,  turned the Daily Mirror into the world’s largest selling daily newspaper. More than 7m copies were reportedly bought on Coronation Day in 1953, and on a more sustained basis,  circulation attained a world record in 1967 of 5, 282, 137.

Francis was born in Buckinghamshire in 1927, one of four children. Two sons went into newspapers, and a third into the newsprint business. Although Cecil was a formidable figure, there was apparently no particular pressure on them to pursue such careers.  The eldest, Michael, became foreign editor of the Daily Mirror. Francis was sent as a trainee to Lagos, Nigeria, to theDaily Times, returning home to marry Jenifer Beckett.  Francis continued his overseas work, and the couple went to the Gold Coast (now Ghana) and spent five years there.  When he contracted an infection in his hands he realised that he was allergic to printer’s ink, so decided to go back to England. In any event he had fulfilled his task which was to transfer the top jobs there to African hands.  He had enjoyed his time in West Africa – he put in a six and a half day working week – and got on well with the charismatic Dr Kwame Nkrumah, who led the Gold Coast and Ghana from 1951 to 1966, when he was ousted in a military coup. 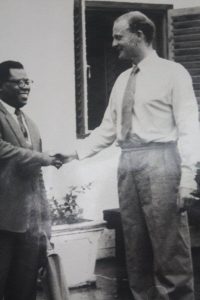 Francis King during his Africa years

Back in London, Francis King was installed for a short time at the Daily Mirror. The Mirror group was acquiring a big stable of magazines, and divided responsibility for them between Francis and other executives. Francis was in charge of Country Life, the New Scientist,  Woman’s Own, Woman’s Weekly,  Honey,  Jackie and Yachting Monthly, among other titles. He retired a little early, and another phase of life began, related to concern for his youngest son, who is autistic. He realised that there were insufficient homes for anyone with learning disabilities and some of those patients had to live with their ageing parents. So together with other families, he set up an organisation called Richmond Homes for Life aimed at giving those who needed care a place to stay for life. They secured a home for six people with varying forms of disability. Subsequently there were two homes with staff, and two flats monitored by carers for relatively independent people.

Mr King was a great letter writer and took up causes including opposition to closures of hospitals. After Suzy Lamplugh, a Fulham estate agent, (who was at one time a beautician on the QE2) went missing in 1986 – her remains have never been found and she was declared dead, presumed murdered in 1994 – he became friendly with her parents. When Suzy’s mother Diana had a stroke in 2003 she was admitted to a local hospital, from where the authorities moved her because of reorganisation.  Mr King was furious over the transfer of Mrs Lamplugh, and vigorously took up her case.  He made strong representations over this and many other health policy matters, setting out his case each time in detailed letters to officials and local newspapers, and frequently lobbying council meetings. Mrs Lamplugh died in August 2011.

Mr King attended St Mary Magdalane Church, in Paradise Road in the centre of Richmond. At the funeral service there, Duncan Ingram, husband of his daughter Sarah, paid tribute to his ‘marvellous’ family values. Friends said he was a generous and thoughtful man, always prepared to help those in distress. Mr King is survived by his widow Jenifer, and two sons (Lawrence and Andrew). Another son, Roger, died in 1995.