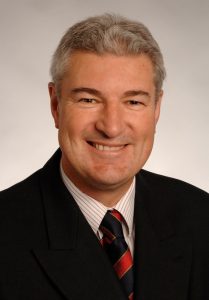 With its theme ‘Delivering Military Effect: A holistic approach to combat and platform system integration’ EAAW V, designed to provide a unique opportunity for experts in combat and platform system design to expose and explore the integration challenges faced, from energy management to open systems, will build upon the success of four previous events in the series and provides a forum for information exchange and much needed analysis and debate.

“I can think of no-one better than Dr Mark Townley to get the symposium off to a flying start, ” says symposium chairman Cdr Matt Bolton RN. “He has had a fascinating career which started in the Royal Navy, then saw him joining Plessey Naval Systems working within the defence industry where, within four years he set up the GEC Marconi Combat System Group.

“He then worked on the Australian Minehunter Coastal contract, took on the role of Operations Director at the newly formed NRTA partnering joint venture, Flagship Training Limited; and then becoming the Brunei and Malaysia Frigate Project Director, and subsequently the T45 Destroyer Project Director responsible for the Combat Management, Electro-Optic Gun Fire Control and Command Support Systems and associated LANs as well as the overall account management of the total BAE Systems Combat System solution. Then came a period as Sales/Marketing and Combat System Account Director responsible for the leverage of T45 and related products into export bids.

“In May 2005 Mark Townley joined the UK Hydrographic Office as the Director of Operations and Deputy Chief Executive, after which he moved to Astrium UK as the Skynet 5 Ground Programme Director. From there he joined the CLM consortium initially as Head of Systems Integration for the Olympics Project, and then Head of Business Services responsible for Prime Contracts and Legal, Human Resources as well as IT and Systems Integration.

“He was then seconded to Crossrail to ensure the critical 3B review was achieved in March 2010 – he’s a man who knows about getting things done on time! Then followed a period as a permanent employee of Crossrail, before he re-joined BAE Systems in September 2011 as the Naval Command and Information System (NCIS) Director in the Maritime Group. He took on the role of Naval Ships Combat Systems Director in April 2012 responsible for all Combat Systems programmes, over 750 staff and an annual turnover of £150m. I can certainly guarantee that our delegates will listen to a highly stimulating, topical and relevant presentation.

EAAW V is held under the patronage of:

The symposium is sponsored by Babcock, Imtech and GE and supported by the IET, ONR, SNAME and SUT.

Following the welcome by Cdr Bolton and the keynote address by Dr Townley, Cdr Neil Gibbs and Cdr Jeremy Bailey, Ministry of Defence will respond to the question “The Ministry of Defence Marine Systems Development Strategy: A vehicle for fully harnessing the resources we have?”

Dr Graham Wallis, MBDA then chairs the ‘Future Platform Systems’ session before the networking lunch on the first day, after which Lt Cdr Ian Hassall RN, Ministry of Defence takes the chair for the afternoon session on ‘Military Effect’.  At the end of the first day a reception and symposium dinner will take place in the magnificent Dining Hall at Wills Hall.

The second day of EAAW V sees Lt Stefan van Osch RNIN, Ministry of Defence, UK chair the session devoted to ‘Complex System Integration’ throughout the morning; and after the networking lunch ‘Future Combat Systems’ come under the symposium spotlight in a session chaired by Oliver Simmonds, GE Power Conversion. The symposium ends after the Symposium Summary by Rear Admiral Nigel Guild CB FREng, a Past President of The Institute of Marine Engineering, Science and Technology.

Further information on all aspects of EAAW V, including sponsorship and exhibiting opportunities is available from www.imarest.org/eaaw. Registration is now open, with an Early Bird discount extended until 10 June 2013, and special rates for IMarEST members, Marine Partners and supporting organisation as well as students.