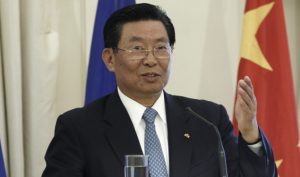 HONG KONG/SINGAPORE, July 2 (Reuters) – China’s largest shipping group, China Ocean Shipping (Group) Co (COSCO Group) has replaced its chairman in what appears to be a bid to boost profitability amid a downturn in the global shipping industry. (source:  Thompson Reuters)

COSCO Holdings logged a net loss of 9.6 billion yuan ($1.5 billion) for 2012, its second year in the red. Its shares have dropped nearly 9 percent so far this year, on course for their fourth year of decline.

Ma takes over COSCO Group as the global shipping industry is suffering from a severe downturn, with new orders at China’s shipyards falling to a seven-year low due to the global economic slowdown and an oversupply of vessels.

The Chinese government has been trying to support the domestic shipping industry since the 2008 financial crisis, and local media reports said this week Beijing was considering policies to revive the shipbuilding business.

“The oversupply in the shipping market is still very severe, so shipping firms and shipbuilders face a grim outlook this year, ” said Lawrence Li, an analyst at UOB Kay Hian based in Shanghai.

“COSCO has been controlling capacity… but their problems have accumulated over the years and were not created just during Wei’s reign, ” he added. (Editing by Lee Chyen Yee and Miral Fahmy)

Norda ASA to be delisted from Oslo Børs