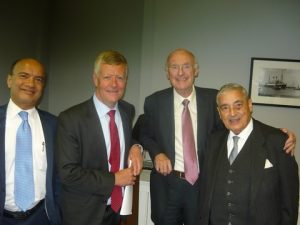 IMIF’s summer buffet luncheon on “LIBOR, BDI, Indices, Markets and Regulation”: the Baltic’s case, John Faraclas was there with his camera.

The Baltic Exchange epitomises the Temple of British and International Shipping, for over 269 years! Since last December it looks as if is in the eye of the cyclone… that blows in Brussels as there are European plans to tighten financial market regulation and these are raising concerns in London and elsewhere. Until now its self regulating system works well and Jeremy Penn, its CEO in his exceptional slides speech last Monday explained all the issues.

Firstly, he was categorical that the thrust of the European Union proposals to force market benchmarks to be based on actual transactions rather than assessments of sentiment could result in the production of indices that are less accurate than at present. 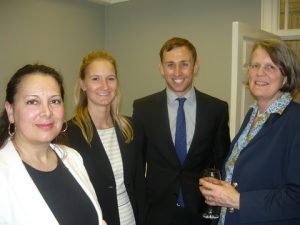 Sandy Apostolatou, Kate Silverstein and James Clayton all from Watson Farley & Williams with Philippa Wright from the hosts Foresight Ltd

Secondly, he opposed the benchmark saying that people might get what they want, but this is no way a true picture of the market!

On the LIBOR he stressed that same was fraud, everybody knows…

I can see that Penn is expecting more talks to take place and that we are in early days before making any wrong assessment, a point well received by the audience.

Moreover on the IOSCO suggestions Penn said that these transactions are not limited to shipping but apply to all commodities market. Worth reminding you that few days before this event, IOSCO met in Madrid covering a range of subjects, including its own work on the extensive international regulatory reform agenda. 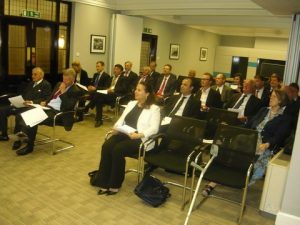 A view of the audience

It remains to be seen what will happen, but I have the feeling that because of the uniqueness in shipping, the Baltic could and must spearhead its own exemption from all these matters, Brussels and IOSCO thinking.

As the presentation was a bit longer than anticipated, only four questions surfaced, but we think its early days and a consultation is needed to explain to Brussels its wrong and unpractical thinking. We asked whether the existence of other indices affects the Baltic and Jeremy Penn responded that this creates a healthy competition. He also said that 50 percent of all fixtures goes through the Baltic, a  very encouraging sign indeed!

The Baltic is fully self-sustained, financial robust and can entertain anybody by expressing its view when it comes to its independence; watch this space!

The event took place at the Baltic’s first floor auditorium and was hosted by Anil Deshpande, the CEO of Foresight Ltd, attracting  over 35 delegates from all sectors of the shipping spectrum, lawyers being the number one group…