Ready to sail in Cyprus for ISAF’s World Youth Championships! 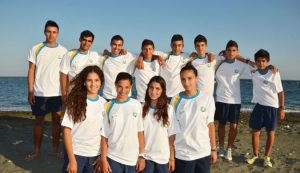 The ISAF Youth World Championship sets its sails this weekend with the boats ready to get into the sea and the games shall indeed begin! The missions are all ready to sail and, following the opening ceremony is not long before the competitive part goes under way.

As the big Sailing Day comes close, the Federation and volunteers alike are up to speed, working on the final details..
“We felt proud as a sailing family as well as Cypriots, with Pavlos Kontides’ silver medal in London. We now want that same pride for a well organized worldwide sailing event”, Cyprus Sailing Federation president John Fotiou commented.

The volunteers
A big part of the organization was in the capable hands of countless volunteers who lent a helping hand to the Sailing Federation in these dire financial times for the island.. Head volunteer, Elias Hadjikoumis sends his message for the games:

“Ι’m a sailing curator of the Famagusta Nautical Club and a member of the board of directors of CY.SA.F. I joined the organization committee as a volunteer , because I wanted to help my country to successfully organize these very important games. By being in charge of the volunteers I couldn’t imagine what was ahead of us and it took months to train volunteers, yet their enthusiasm and hard work paid off. Now, a day before the games begin, I am pleased and extremely proud. We have managed to have almost 200 volunteers and am certain that the end result will be amazing”.