When it comes to protecting the hulls of ice-going vessels, the glassflake reinforced surface treated composite (STC) Ecospeed® has proven to be remarkably durable, typically outperforming many specialized ice class paints. The fact that the coating is non-toxic is also particularly important for ice trading vessels where toxic AF coatings are rapidly scraped off and deposit their toxic ingredients in what are often particularly sensitive environments.

Icebreakers and ships that trade in icy waters have their own very specific problems when it comes to protecting their underwater hull. Icebreakers have to use their weight to ram into thick ice and force a passage. Ice going ships, such as those trading in the North Baltic, the northern coasts of North America, the Great Lakes, and so on, are constantly being hit by chunks of ice which may be 50 centimeters or more in thickness. Not only is the ice highly abrasive, there is the additional factor that the steel of the hull flexes under the impact. When the metal sheets that form the hull flex and bend under collision with the ice, the paint that is supposed to protect them does one of two things. It either is flexible and adheres so well to the metal that it is virtually part of the steel itself and thus survives, or it is less flexible than the hull and cannot flex with the steel, in which case the paint gradually, or not so gradually, is disbonded from the hull and rubbed away under the impact. It is a problem which is unique to ships faced with ice impact.

Ecospeed demonstrates excellent attachment to the hull and successful resistance to extremely icy conditions. Ecospeed has proven its ability to withstand the harshest winter conditions on numerous occasions. For over seven years a number of vessels coated with Ecospeed have been sailing the most northern parts of the Baltic Sea during the winter season and as far as both the North and the South Pole. These vessels’ underwater hulls frequently have to endure the impact of large pieces of floating dry ice. Despite this, there has been neither damage from the ice nor any deterioration of the coating and none of these vessels have required more than just a few touch-ups during their drydock visits.

Ecospeed has received the Lloyd’s Register certificate that recognizes the coating as an abrasion resistant ice coating.  This allows owners of vessels intending to navigate in ice conditions to reduce the thickness of the plating of the ice belt, the area on the bow just above the waterline that is most prone to mechanical damage from sailing through ice, if this area is coated with Ecospeed.

Some cases in point – No repaint needed during drydockings

Interscan Schiffahrt controls a fleet of 23 container and multipurpose cargo ships ranging in size from 1, 723 to 11, 800 dwt. Many of these vessels trade in northern Europe, generally in the Baltic. 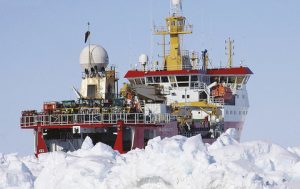 RRS Ernest Shackleton in Antarctic ice up to 2.5 m thick.

Until 2005, all those ships trading in ice in the Baltic region went through a cycle of having all their bottom paint scraped off by the ice each winter and having to drydock and repaint every spring. The paint used was a standard epoxy coating.

In 2005 the then superintendent engineer came across Ecospeed. He decided to test the environmental and fuel saving benefits of Ecospeed, a novel, environmentally-benign, hard coating system.  MV Patriot was their first ship coated. The Patriot is an 82.3-meter ice class E2/Finnish 1B general cargo vessel. According to Michael Tensing, in charge of chartering at Interscan, the ship was in need of a full reblast at the time due to the built up of multiple layers of epoxy, so the time was right to prepare the hull fully and try Ecospeed.

It is now seven years since Ecospeed was applied on the first Interscan vessel. Michael Tensing says, “She was here recently and the paint still looks good. That’s the best advertisement you can have. You don’t have to do much to the paint. It’s only a can of paint for touch-ups, just cosmetics at the anchor pocket or if you have mechanical damage or something. The rest to my mind is really very good.” As he points out, there really is no other coating that could stand up to seven years of trading in ice and still remain intact and not in any need of repainting or anything beyond very minor touch-ups.

Michael Tensing estimates that at current rates the payback for full hull preparation and coating with Ecospeed for a newbuild would be five years. Since Ecospeed properly applied is guaranteed for ten years and expected to last the full life of the ship, the economic factors are very positive. And these figures only take into account the cost of preparation, paint and application, compared to the conventional coatings they were using, without regard to potential fuel savings from correct use of Ecospeed. All the Interscan Ecospeed coated vessels will soon have exceeded the payback period. So far all the ships have kept their coating in excellent condition.

W&R Shipping finds Ecospeed to be the best coating

Wim van Eck has spent most of his seafaring career as a captain, trading mainly in the North of Europe and the Baltic Sea. “Of course we always were confronted with the fact that in the winter time when you were sailing through the ice your paint was gone and so you had to do something about it in the summer time, ” he explains. “You had to drydock in order to repaint.”

In 2007, Wim came across Ecospeed. Having read of the success Interscan was having with Ecospeed on similar vessels, also trading in Baltic and Northern European ice every winter, W&R decided to try Ecospeed themselves.

The first vessel to be converted to Ecospeed was the Crownbreeze. Like the other W&R vessels, the Crownbreeze previously had a high abrasive specialty ice coating. “I can’t say that the earlier coating worked very well, ” says Wim. “When it was new it was not too bad, but of course you get a lot more chipping than with Ecospeed, so every docking you have to touch it up and it gets rougher.”

The Thea Marieke followed in the wake of the Crownbreeze with an Ecospeed application in 2008. Those were the two where the original coating was replaced. Subsequently, the Crown Mary, the Tina and the Anna Dorte also had Ecospeed applied at newbuild stage which is the ideal time to apply the coating.

The Crown Mary went to drydock in June 2012 after two and a half years’ sailing in ice with Ecospeed. “There was some small mechanical damage but nothing really major, ” says Wim. “We didn’t need to do anything with the hull paint in drydock.” The Crownbreeze was docked in 2009 and again in 2012, five years after the Ecospeed was applied. Nothing had been done with the paint in the 2009 drydocking.

Wim also points out, “Having Ecospeed on the hull can save us some days in drydock which would be needed to repaint if we were using a less durable coating.”

This icebreaker Oden came in to drydock in Landskrona, Sweden, in April 2009 after sailing with Ecospeed on parts of its underwater hull for two years. During this period it was used for several expeditions to both the Arctic and Antarctic.

After Ecospeed came out on top in a comparison between test patches coated with Ecospeed and another ice-strength paint, the management of the vessel was more than happy to have the rest of the underwater hull coated as well and also ordered the same treatment for fellow icebreaker, Ymer.

The Oden’s Captain, Erik Andersson, recalls the problem with hull protection prior to 2007. “When the Oden went down to Antarctica the first year, we found that icebreaking was quite different down there, especially when you get close to the coastline where there is a lot of lava sand in the ice which makes it more or less like sandpaper. Also the ice is extremely hard in those areas. Due to that fact, the first year the icebreaker paint we were using was almost all more or less destroyed on the bow area so we were left with virtually unprotected steel.”

“We’ve had Ecospeed on the bow for a couple of years now, ” continues Erik Andersson, “And it’s still there. It gets thinner and you can see that it’s actually shaving and getting thinner, but it’s still providing protection for the steel, whereas the conventional ice strength paint we were using would probably be gone by now.”

When British Antarctic Survey’s RRS (Royal Research Ship) Ernest Shackleton was drydocked in Denmark, the superintendent, engineers and paint specialists there to check the condition of the hull paint were amazed. After two seasons of battering its way through ice up to 2.5 meters thick with a high content of gravel and volcanic lava adding to its abrasiveness, the hull coating was virtually intact and undamaged. This was in strong contrast to the Shackleton’s previous drydocking, when almost the entire hull, bearing a conventional ice-going underwater hull coating, was practically stripped to bare, unprotected steel.

The difference lay in the fact that when the Shackleton left drydock in 2009, the hull was newly coated with Ecospeed. Even though Ecospeed is not intended specifically for ice-going ships and icebreakers, it consistently outperforms the specialized ice-going ship bottom paints.

Stephen Lee was the Senior Marine Engineer for British Antarctic Survey, the BAS’s equivalent of a Technical Superintendent. He recalls the reaction of those present when the Ernest Shackleton was first pulled out of the water at Frederikshaven drydock in early 2011 “The biggest thing was the surprise at seeing the areas where you’d expect it to have taken a lot of damage… when she first came out of the water and onto the blocks it was a complete shock to all those present. All of us there commented on the condition of the hull and in particular that there was negligible damage at the bows, merely some scratch marks. None of us there would have predicted this. I then jokingly asked the question, ‘Are you sure you’ve taken this ship to the ice?’” According to Stephen Lee, the crew of the Shackleton reported that they had been pushing into 2 – 2.5 meter thick ice, “…and it’s just not touched it – just not touched it at all.”

Howard Jess was the paint inspector for the initial Ecospeed application to the Ernest Shackleton in 2009. “I was very impressed with the condition of the coating on the Shackleton after two seasons in the ice, ” says Howard. “Apparently she had been trapped in the ice on several occasions and the procedure is to reverse and then crash forward at full speed. Yet the coating remained intact – pretty impressive. I would have expected to see damage down through the coating exposing the hull. However the bow looked as if it had just been painted. Crew members who had seen the ship out of the water on numerous occasions said that they had never seen the hull looking so good after two seasons in the ice.”

Howard also has some advice for shipowners applying Ecospeed to their ice-going vessels: “For some reason the current mind-set is to stop at the waterline. Given that ice tends to ride over itself and up the hull it would seem sensible to extend the coating to 2–3 meters above the waterline.” A piece of wisdom obviously shared by Stephen Lee, evidenced by the fact that while the Shackleton was in drydock recently, the level of Ecospeed coating was raised from the water line to well into the boot top area for protection.