Top Posts
Don’t take chances where your health is concerned…
How Greek shipping can cut costs and improve...
GLOBAL & REGIONAL DAILY (Thursday 13 May, 2021)
RMT calls for action to protect seafarers’ mental...
Poseidonion Grand Hotel welcomes you back on May...
Large Diameter Drilling to partner with DEME Offshore...
Cyprus Ship Management Round Table Webinar and Debate
Lady Moura up for sale… plus more
Will the dollar decline? The changing landscape of...
TSUNEISHI SHIPBUILDING collects actual operation data by IoS-OP
Deltamarin is proud to be a part of...
Home HRBooks Sisters, Secrets and Sacrifice
BooksMilitaryPeople and PlacesPerson ProfilesReports

After France fell to the Germans in June 1940, the sisters Jacqueline and Eileen (Didi) Nearne, Anglo-French, fluent French speakers, made the dangerous journey to Britain  and joined the  war effort.  Applying to the Ministry of Labour stressing their language abilities,    Jacqueline, the eldest, was introduced in autumn 1942 to Maurice Southgate for whom she would work as a courier trained and deployed by the Special Operations Executive (SOE).  They would, Susan Ottaway records in her powerfully written book Sisters, Secrets and Sacrifice develop a highly efficient and close working relationship.  Their task was huge – they would be building a circuit, codenamed Stationer, stretching from Chateauroux, Indre, central France, to Tarbes, in the south-west département of Hautes-Pyrénées, 100km from the Spanish border.   For a time Jacqueline would be Stationer’s only courier.

Communications difficulties between agents in  France and organisers at home were exacerbated by myriad local tensions and rivalries, not least those adhering to SOE itself – to say nothing of the weather affecting parachute drops of agents, food, arms and sundry equipment.  Against an early uncertain background as officials in  SOE’s French section were entering their own learning curves, and despite knowing her security to be internally compromised,   Jacqueline, now trained, went to France anyway  and  got on with  her  job.

Eileen Nearne was more gentle and reflective than her sister though no less able. A gift for acting probably saved her life.  Joining SOE as a wireless operator, transmitting in the eastern suburbs of Paris  in July 1944, a few weeks after the Allied landings in Normandy, having sent 105 messages over four months and about to move to a new location, Eileen was identified by Gestapo agents via their detection vehicle and arrested.  Interrogated, tortured, but steadfastly maintaining her invented  persona, she was sent to Ravensbrück concentration camp.   While the Allies were crossing Germany in early 1945,   with the Russians pressing from the east, Eileen and her fellow prisoners, moved to labour  camps, like so many others, were put on  forced marches from one camp to the next as the Germans, still undefeated, began  retreating.   With two other women she escaped.  Her troubles not over, Eileen nevertheless returned to home and safety, as had an exhausted Jacqueline.  Jacqueline subsequently went to France in November 1944 with the Judex Mission, effectively a follow-up by SOE’s French section’s officials to meet resistance groups.

After 1945 Jacqueline had an estimable career with the  United Nations; cancer, alas, taking her and the sisters’ two brothers at a relatively early age.  Suffering badly from traumatic stress disorders, after spells of treatment supported by Jacqueline, Eileen became a nursing auxiliary and care assistant in London, retiring to her small flat in Torquay, where she died aged 89, a much-loved,   religious and witty aunt and to her neighbours a well-liked, if mysterious, elderly lady.

Because Eileen died alone, yet in the flat she so enjoyed, it fell to the police to search for clues as to her next of kin. In the process they came across newspaper cuttings and medals.  Among the latter an MBE and French Croix de Guerre were discovered.  Jacqueline, also awarded the Croix de Guerre, was made an honorary citizen of Boulogne. MBEs were conferred on both sisters in the civil, not military category however. 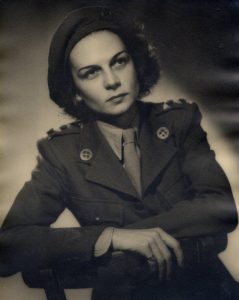 In their traumatised land, many French were infinitely generous during World War II in supporting domestic and foreign resistance group members and  also later  in making  their individual awards. On the other hand, an official British prohibition against women bearing arms made them ineligible for military medals. That arms ban long since dropped, proper appreciation of Eileen Nearne’s consistent bravery and resourcefulness as agent, prisoner and escaper, was at last made. Hundreds  lined the streets  of Torquay  on 21st September 2010 as the cortège led by two Scottish pipers, made its way to the church  for a Requiem Mass.

The coffin, draped in British and French flags, passed by to the lowering of flags by the local British Legion:  “As Didi’s coffin was carried from the church, ” Susan Ottaway writes, “buglers from Britain and France played the Last Post while French Consul General, Edouard Braine, told reporters, ‘Personally I owe her the freedom of my country… all my compatriots think the same way.’ ”

Some days later Eileen’s niece and family went out to sea in a Royal Navy boat, followed by French marines.  After a short ceremony conducted by a Roman Catholic priest, Odile scattered her aunt’s ashes on the sea she had loved.

Eileen Nearne (left) with Odette Hallowes at Ravensbrück in 1993

This is an absorbing, historically valuable account of Jacqueline and Eileen Nearne’s war service.   With the help of their niece, Odile, who provided family papers and photographs; assisted by interviews with Eileen herself from 2001, Susan Ottaway has brought the sisters’  personalities vividly to life.   Mastering difficult primary and secondary source material with humanity and  warmth,   her  narrative introduces important corroborative insights into SOE with clear glimpses of some  leading individuals;  into the kind of lives British and French agents led  and the price  most were prepared to pay for their clandestine actions in France.  Amidst a plethora of volumes by and about World War II secret agents and their organisations, Susan Ottaway’s book surely occupies a special niche.

Georgina Natzio is a specialist writer on defence issues.