MAN Diesel & Turbo has won an order to supply the main gensets for a multi-layer vessel newbuilding, recently commenced by Lloyd Werft Bremerhaven AG for British client, Ceona. The Ceona Amazon will be equipped with 2 × 9L32/44CR + 4 × 8L32/44CR main gensets, providing a total output of 28MW. Each engine will be constructed at MAN Diesel & Turbo’s Augsburg production facility in southern Germany, and later transported to the company’s Frederikshavn, Denmark site for a full electrical test before the gensets’ delivery to the shipyard. 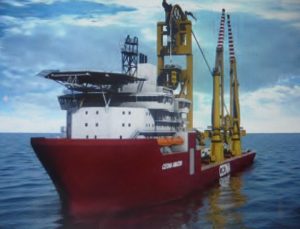 Based on a drill-ship design, the Ceona Amazon boasts exceptional sea-keeping characteristics making it ideal for operations in remote and challenging locations.

The multi-layer vessel is a large, state-of-the-art, multi-functional, dynamically-positioned, construction vessel. The Ceona Amazon has a large, under-deck storage capacity for line pipe or umbilicals, together with a large deck area that allows the further storage of line pipe and standard, flexible installation reels. 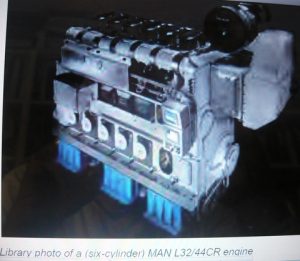 The vessel is fitted with two heave-compensated mast-head cranes, and a single heave-compensated knuckleboom crane. The pipelay system consists of an inclinedlay system and a rigid, pipeline firing-line system. The vessel can lay rigid pipelines, flexible pipelines and umbilicals, and can install large, subsea structures using one or both of its cranes in tandem-lift mode to 3, 000 metres depth. It doesn’t require a spool base to support its operations and can be remotely operated, making it extremely well-suited to overall field development.

UK-based Ceona delivers tailored solutions for marine projects around the world, including in some of the planet’s most remote locations. With extensive experience in the subsea construction industry, Ceona is currently upgrading its fleet and developing its position as a specialist offshore contractor in the engineering, procurement, construction and installation markets.

Lloyd Werft Bremerhaven AG is a shipyard in Bremerhaven, northern Germany, which was founded in 1857 as a workshop of the North German Lloyd shipping line. Today, the yard focuses on the repair, conversion and extension of large ships, as well as newbuildings. It employs 350 people at a working facility of 260, 000 m² on the North Sea, near the outflow of the River Weser, and can handle ships with a maximum draft of 11.5 m.