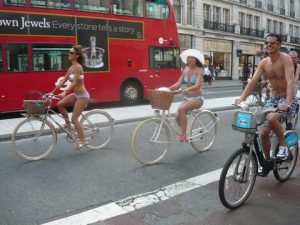 by the Beachcomber  …err John Faraclas

I am sure that over the last three months that you watch my live Friday interviews at SBC TV, in which the weather has the priority, the preamble during all interviews and defending same is the fine British weather – that is on par with that in the south Med, Greece in particular!

Be it with Panos Thomakos or Lilian Margaritis or lately with Niky Lymperakis, and to the detriment of all three – you can listen their objections – how they also loose…and the many of the viewers, the British weather is on par with that of the poor European South, so nothing to envy….  Climate change is coming up at a faster pace, and over the last 30 years in the British capital, one can see this change from the rag trade business, leading to new dress codes – dress down Friday et al…. The temperature experienced lately breaks all previous minimum equilibrium records (that’s how I calculate these phenomena), and affects the trade, but also changes the mood and reaction of the public… 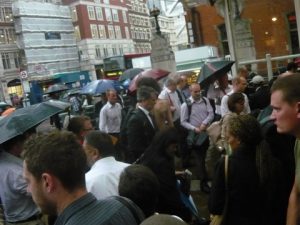 Liverpool Street Station, Bishopsgate exit, Monday 5th of August 2013 at 17:15 BST – in contrast with Regent Street’s sunshine, in less than 48 hours, the weatherman got it wrong !  Can you spot anything “unusual…” ?- photo: courtesy John Faraclas

Predictability is one thing though and things, as in business, should not be taken for granted; asymmetrical changes can happen in a second, sometimes proving wrong the best weather forecasts… Did I hear you say astronomical phenomena big brother doesn’t want you to know of…?

Last month it was the warmest and sunniest since 2006 and the third warmest since 1910 – since records began in the UK! The soccer season is starting again this month and well: Is Autumn knocking your door? What’ the score?

Now, let’s see the shipping indices rise or else… and forget the temps…

P.S. Where ever you are, tune on the song: “In the summertime” by Mungo Jerry

and never forget: The Beatles with the Rain!

Enjoy the rest of the season!

*Listen to this one and make sure for all three songs you learn the words; they could prove valuable one day!

All international ships are at risk of attack by terrorists