It is with great sadness that Dunelm announces the death of its founder and Managing Director, David Cheslin.  David had been in hospital for six months having undergone two liver transplants and died suddenly on the evening of Monday 5 August.

David was brought up in Hartlepool on the East Coast of England.  It was from there that his love of ships and shipping grew as he cycled around the shipyards of Tyneside, Gateshead and Middlesbrough. He went to university in Liverpool where there were more ships for him to spot and when the physics part of his maths degree got too much for him he found a temporary job working on the Liverpool Journal of Commerce and Sea Breezes. Brian Singleton gave him his first ‘proper’ job in shipping journalism on Shipbuilding and Shipping Record in the early 1970s.  He went on to work on Cargo Systems and to work in the PR department of MacGregor Hatch Covers before becoming Deputy Editor of Containerisation International during Richard Gibney’s editorship.

He was the first UK shipping journalist to go to Taiwan in the mid ‘70s to visit a fledgling Evergreen and from this visit a relationship was formed that was to last over three decades. In 1978 David went into PR, working for Richman & Associates, and soon attracted Evergreen’s PR account as Evergreen expanded its European network.  When David set up Dunelm Public Relations in 1981 the Evergreen account came with him and grew as Evergreen expanded, launching its Round-the-World service in 1984.  Evergreen was David’s passion for many years.  He especially enjoyed the close co-operation he forged with senior management and was proud of the Group and its achievements. In recent years he derived much satisfaction from his work with Rickmers Linie.  Dunelm was introduced to Rickmers by Sean Gay. 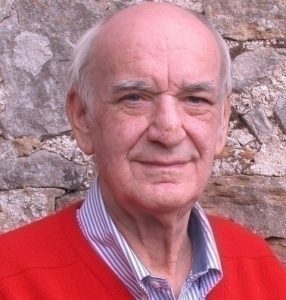 Sean Gay commented: “Over the decades I worked with David he became very much the elder statesman of PR in the shipping industry, always interested in exploring new avenues and discussing challenging ideas. He brought to Rickmers the same breadth of imagination, skill and marketing knowledge which proved so successful during his long and happy association with OT Africa Line.” David’s love of shipping led him into many areas over the years: P&I, ports, shipyards and latterly industry topics.  He had a long association with Thomas Miller, firstly through the TT Club and lately with UK P&I.   He was concerned about Overweight Containers and organised two Dunelm conferences ‘Learning from Annabella’ and ‘Weighing Containers – is it really that difficult?’

In 2004 he set up the Coastlink Network in conjunction with Gavin Roser to promote shortsea and feeder container shipping – an integral element in a competitive supply chain.  Coastlink went on to host many popular and successful conferences which were a forum for lively debate and networking for its faithful followers.  Gavin Roser said: “Everyone who knew David and Coastlink say without hesitation that David will be missed by so many people in the ports sector, shipping lines and shippers and even the regulators many of whom used Coastlink as a sounding board for an effective industry perspective.  The fact that Coastlink really made a difference thrilled David and it is a testament to his vision and drive that Coastlink has had an impact on the industry throughout European waters.” David was a consummate PR professional.

He was the scourge of many a young account executive in his insistence on correct grammar and punctuation.  If there was a typo in a press release you could guarantee he would find it.  As one of his friendly competitors said “He raised the standards in Maritime PR” David had many other interests – Porsche cars, motor racing and the music of West Africa to name a few.  Latterly his love of his farm in Northumberland was a large part of his life.  His pet sheep Dora – who David fed by hand when she was a lamb – remained devoted to him introducing him to her various offspring over the years.

He is survived by his son, Aidan and his partner, Margaret. Dunelm is grateful to its clients who have borne with us during the several months since David’s first transplant. A Memorial Service will be arranged to celebrate David’s life and achievements.  Details will be posted on the Dunelm website www.dunelmpr.co.uk or available from the office.