Louisiana Museum of Modern Art showcases the life’s work of Yoko Ono – while the permanent collection thrives thanks to donors including the Møller Foundation,  By James Brewer 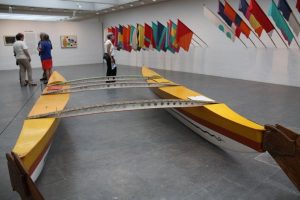 Untitled (Catamaran) Plywood, plaster and paint. By Poul Gernes. In the background: Untitled work in wood and cloth, by Poul Gernes

“When you do an exhibition in Louisiana, you have arrived, ” enthused Yoko Ono on day one of the most comprehensive retrospective of her works yet staged in Europe.  The Louisiana in question is not the American state, but the compellingly progressive Louisiana Museum of Modern Art, reached after a pleasant 35km journey north from Copenhagen following the shore of the Øresund.

Yoko Ono ‘arrived’ on the scene with élan many years ago, long before her association with John Lennon, so her excitement was a symbol of her immense pride in seeing her large-scale show as the summer focal point of the gallery. 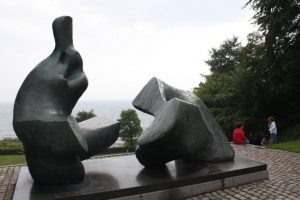 The Japanese/American artist told a press conference in June that as soon as she landed in Denmark, “I did not go to my hotel from the airport – waste of time!  I came immediately to Louisiana.”

Louisiana has a magnetism that has drawn many big names into its force-field. Apart from leading artists and a stream of tourists – many of them new to taking a thoughtful view of contemporary works – these have included the shipowner and benefactor Mærsk Mc-Kinney Møller, who died aged 98 in April 2012, and whose family trust is a donor. 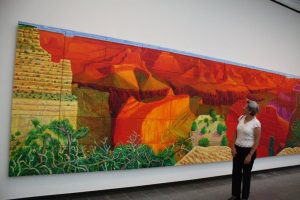 A Closer Grand Canyon Oil on canvas. By David Hockney. Acquired with the support of the Møller Foundation

We shall return to Yoko Ono later in this article, but first readers should be aware of the charming story behind the name Louisiana: it was bestowed in 1855 upon a grand house built by a master of the Royal Hunt, in honour of his three consecutive wives, who all happened to bear the name Louise.

The villa,  commanding a view of a 25 acre estate,   was purchased in 1958 by a man who had made his fortune in the dairy business, Knud W Jensen (1916-2000). Mr Jensen wanted the property specifically to house an independent art museum “for the people, ” accessible to those of all ages and tastes, and to be an antithesis to starchy big-city museums. He arranged the lay-out so that entry is through the old house into comparatively new wings set amid verdant parkland with views out to sea. 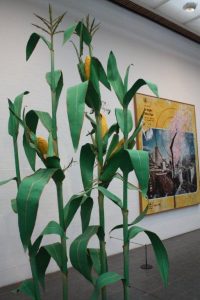 Mr Jensen retained for the site the name Louisiana, “a choice we have never had cause to regret, ” says the present management. Mr Jensen was director of the museum from 1958 until he retired in 1995, and his philosophy lives on – staging popular exhibitions (such as might be argued is the case with the Yoko Ono attraction) that would lure people to see during their visit works they would ordinarily never go near. 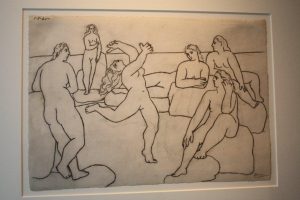 After walking 15 minutes from Humlebæk station, and buying tickets at the stately house, visitors emerge through the gift shop delightedly to a panoramic view across the Baltic Sea with Sweden just visible in the distance. They are immediately stirred by the sight of the beginnings of a glorious sculpture park, which hints at many sculptural surprises elsewhere in the grounds. Wandering along the garden paths to discover the exhibits is, as the colloquialism has it, “a walk in the park, ” literally so. 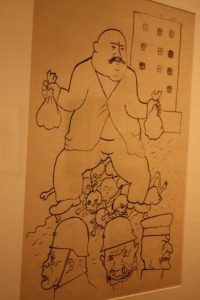 That being said, few people realise the significance of the now tranquil area in Denmark’s modern history. The land is in part composed of excavations to build a fortified harbour which was to have been the base for a fleet of privateers seeking revenge on English naval and merchant ships for the Duke of Wellington’s bombardment of Copenhagen in 1807 – although the Danish buccaneering plans came to nothing.

Lacking public funding, Louisiana relies on the generosity of private individuals and charities, and among supporters has been the Møller Foundation, or to give its full name, AP Møller og Hustru Chastine Mc-Kinney Møllers Fond til almene Formaal. The foundation was established in 1953 on the basis of a family trust created in 1946 to pursue the philanthropic interests of the shipping magnate AP Møller. Its aims include working for co-operation between Denmark and the other Nordic countries, promoting Danish shipping and industry, and funding restoration of historical monuments.

The Møller Foundation accumulated large stakes in the companies that were in 2003 merged into the group AP Møller–Mærsk, giving it more than 50% of the voting shares. After his father’s death in 1965, Mr Møller chaired the most significant companies in the group including the foundation. 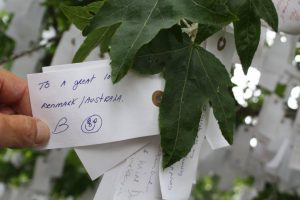 In 2007 the foundation helped Louisiana to acquire the stunning 2 m by 7.5 m painting A Closer Grand Canyon that had been executed by David Hockney in 1998. According to an official statement from the museum: “The work immediately placed Hockney at the centre of the museum’s collection and is an indispensable masterpiece in the Louisiana collection.”

The Hockney blockbuster in his trademark brilliant colours takes its sizeable place amid a selection of the 3, 000 works in the Louisiana permanent collection. The collection deals mostly with the post- 1945 period and includes major works by Picasso, Giacometti, Dubuffet, Yves Klein, Andy Warhol, Rauschenberg, Henry Moore, Louise Bourgeois and Kiefer.
Ever-energetic Yoko Ono is rejoicing until September 29 2013 in the story of her life’s work to date under the title Half-a-Wind Show. She has been described as “a legendary artistic pioneer, ” in response to which she commented: “I don’t feel that I am a living legend. I do feel that all of us are living legends.”

Still, she has been for more than half a century a leading avant-garde artist and passed her 80th birthday earlier this year. Among more than 100 works on display are visual art, poetry, recorded music, installation, performance art, film and participatory events. The utter simplicity of some of her works makes them hard to accept as meaningful until the viewer comes to terms with the way that she seeks to convey ideas in a subtle, original and easy to understand manner.

To encourage people to stop and think about the world around them, she often expresses her philosophy through Instructions, such as: listen to the sound of the earth turning, or watch the sun until it becomes square.

After a fascinating introductory wall of biography and photos chronicling her remarkable eight decades, the exhibition delves back to the early 1960s when Yoko Ono intrigued New York and Tokyo with experimental and conceptual works. In her 1961 performance Cut Piece, shown on film, members of an audience walk on to the stage shear off with scissors sections of her costume – the viewer taking from the artist what he or she wants, instead of the artist setting the agenda. She says that she allowed some of her best outfits to be cut up, at a time when she was very short of money.

Coming right up to date, in a new installation Moving Mountains, people are invited to make mobile sculptures from cloth bags. An auditorium is devoted to her extensive musical output, discs, videos, concert recordings, LP and CD covers, and posters.  It is not widely known, but it is unsurprising, that as a child Ms Ono trained in classical Japanese music and German Lieder. 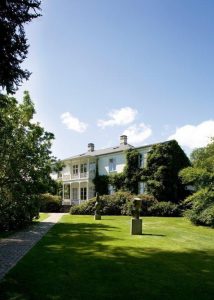 Outside in the park she has adopted a large tree as one of her Wish Trees, for anyone to hang their personal wishes written on luggage tags – an extremely popular project, especially with children, and, who knows, something that Louisiana might want to make a permanent feature?

Yoko was swift to identify one of the great achievements of Louisiana – allowing the many works what might be called plenty of room to breathe. “You are so respectful about space, and that made me feel so good, ” she said, going on to an observation reprising her fondness for interactive performance: “You might be experiencing me, but I’m experiencing you!”

The Calder Terrace of Louisiana café with a view over Øresund. Credit Louisiana Museum of Modern Art.

A magnificent catalogue of the Yoko Ono exhibition (which began at Schirn Kunsthalle Frankfurt, and is going on to Kunsthalle Krems followed by the Guggenheim  Museum at Bilbao) complements the experience.

Eye-catching contemporary art is everywhere at Louisiana, within and without the whitewashed galleries. The Møller Foundation rates a further mention for having with Galleri Bo Bjergaard made possible the acquisition of a dozen dark bronze pieces in a group modestly entitled Modellen by celebrated  1938-born Danish artist Per Kirkeby. 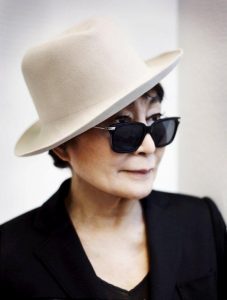 In an adjacent room are examples of the output of Poul Gernes (1925-96) including his Untitled (Catamaran) of 1967, a construction of plywood and plaster with paint. Honouring the universal power possessed in “the embrace of the elements by the catamaran, ” this is a reflection of his love of boats, which he shared with the public on many occasions, including a 1970 group exhibition at Louisiana, when he set up a boat-building workshop.

Louisiana’s collection swings through European nouveau réalisme, American pop art, German art of the 1980s, and video art from the 1990s onwards. It is strong in constructivist works, including drawings and gouaches from early Russian and European protagonists.

One focal point in the collection is a series of 24 works by the Swiss sculptor Alberto Giacometti (1901-1966), his tall, thin figures evoking a sense of man’s loneliness. When it is time for refreshment, the view from the outdoor café terrace is of the playful iron sculptures of Alexander Calder (1898-1976). 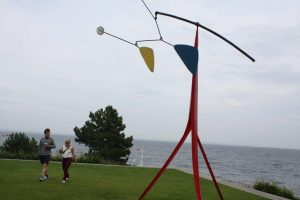 Following the Yoko Ono event, the next exhibition, from September 25 2013 to February 2 2014, will be Arctic, based on  the voyages, expeditions, theories, mapping and artistic interpretations of this region that is under pressure from climate change and political and commercial exploitation. On show will be classical images and contemporary art, expedition photos and scientific specimens, literature, film and sound. Arctic has been conceived by Louisiana director Poul Erik Tøjner as curator, in cooperation with art historian Mathias Ussing Seeberg.

US all-water shipping services after Panama expansion: the direct versus transhipment debate