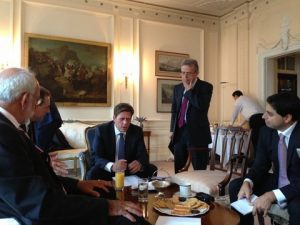 Greece’s Shipping and Aegean Minister Miltiades J. Varvitsiotis come to London last week during the London International Shipping Week. In a well-timed visit, Varvitsiotis met with Koji Sekimizu, the Secretary-General of the IMO stressing him how important is for IMO to continue and legislate international shipping and the continuous support of the Greek State. Varvitsiotis offered to send more officers and high level personnel to the IMO enhancing the organisations’ capabilities given the level of education and training in tackling international issues by Greek specialists – both Coast Guard Officers and civilians.

Varvitsiotis met his counterpart for shipping affairs at the DoT, Stephen Hammond to whom he emphasised the importance of both nations as traditionists in the sphere of maritime affairs, an over three century’s cooperation.  He mentioned the coming Greek Presidency in the European Union as well as the importance of the policies concerning the Greek Islands Archipelaga and its development, mentioning that Greece can take initiatives for the overall European Islands Policies.

The issue of illegal immigration was also discussed with Varvitsiotis  mentioning that due to the austerity and financial problems in Greece all issues of immigration should be financed by the External Borders Funds, as Greek expenditure is overstretched and Britain should contribute, as has done many times in the past, with crafts and other assistance supporting the Hellenic Coast Guard in tackling illegal immigrants. The LNG issue was raised as same is more environmental friendly and cheaper without the volatility and high fluctuations of oil. 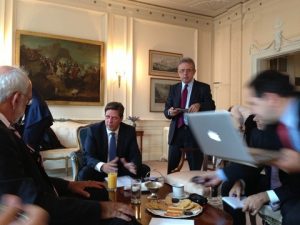 Varvitsiotis met also with the president of the Greek Shipping Cooperation Committee (GSCC) Harry J. Fafalios and had discussions vis-à-vis the total improvement and development of the reinstated ministry of Shipping as well as other issues.

Before leaving for Athens he gave a press conference at the Ambassadorial Greek Residence in London, an interview at Bloomberg and one with CNBC.

Wreck removal costs are spiralling across the industry, IUMI conference is told on the day the Costa Concordia is raised