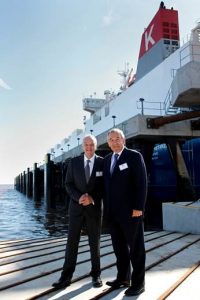 On Friday, 20 September, Associated British Ports (ABP) officially opened a brand new terminal for handling vehicle imports and exports to and from the UK.

The Grimsby River Terminal (GRT) represents a £26 million investment in ABP’s Port of Grimsby and is capable of berthing two vessels simultaneously, each carrying up to 3000 cars.

Part of the UK’s busiest car handling port complex, Grimsby and Immingham, the Port of Grimsby currently handles nearly 400, 000 vehicles per year and customers include Volkswagen Group, Toyota, Peugeot Citroen and Suzuki.
By significantly increasing capacity, the new terminal will be capable of meeting rising demand from both existing and new customers.

As well as ABP’s Port of Grimsby, ABP also owns and operates another of the UK’s premier car handling ports, the Port of Southampton.

ABP Chief Executive, James Cooper, commented “This terminal, together with the brand new car handling facilities which ABP will shortly open in the Port of Southampton, is testimony to ABP’s strong commitment to serving the UK’s international automotive trade.”

ABP Port Director Grimsby & Immingham, John Fitzgerald, added “The terminal also shows how ABP is dedicated to building long term relationships with customers and delivering modern facilities that can help drive growth.”
Volkswagen was the first company to import vehicles through the Port of Grimsby almost 40 years ago. Opening the terminal, VW’s Robin Woolcock, said: “I am privileged enough to have seen this project right through from conception to completion and I’m proud to be here to mark the opening of the facility.
“Previously the lock put a limit on the number of cars we could bring into the port, so we’re extremely grateful to ABP for investing and securing the future of the Volkswagen Group at Grimsby.”

ABP Grimsby is part of the UK’s busiest car handling port complex, Grimsby & Immingham, which handled a total of 786, 000 vehicles in 2012.
ABP Southampton

ABP is the UK’s leading ports operator handling around one quarter of the nation’s seaborne trade.

ABP’s 21 ports, together with the other transport-related businesses that constitute the ABP group, form a UK-wide network capable of handling a vast array of cargo. ABP is backed by investment in modern facilities and equipment, and supported by experienced staff. The group’s other activities include rail terminal operations (Hams Hall), dredging (UK Dredging Ltd) and marine consultancy (ABPmer).

Over the next 5 years, ABP plans to invest over £450 million in a wide range of major projects across the group.

The four ports of Grimsby, Immingham, Hull and Goole handle more than 60 million tonnes of cargo between them each year.

Grimsby and Immingham form the UK’s biggest ocean gateway and moves around 53 million tonnes of cargo per annum.

The shipping markets: be on guard…despite Capes and Panamaxes being in “demand”…