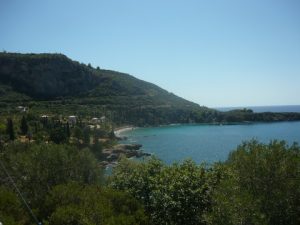 On 19 October, Southbank Centre hosts a pantheon of Greek and ‘grecophile’ writers, poets and performers, to showcase the contemporary culture of Greece. Greece Is The Word! is an exploration of the country behind the headlines, and the culture behind the crisis.

The most exciting names from Greece’s literature and performance scenes have been brought together by Greece Is The Word! curator, Rosie Goldsmith, to celebrate Greek culture with a cutting-edge, creative response to the Greek crisis – and it’s all in English.

Highlights of the day include:
Readings and discussion on Greek fiction, poetry and translation, and on the crisis affecting the Greek book industry, with major names from Greece and the UK, including historian Bettany Hughes and novelist Victoria Hislop (dressed exclusively by top Greek fashion designer Mary Katrantzou)

Victoria Hislop says: “In spite of the current crisis, which is closing down both publishers and bookshops,  the Greek literary scene is a hugely vibrant one and we are very excited to be bringing some of the country’s best known and most talented novelists and poets to the Southbank for “Greece is the Word”. We will be hearing about the themes that inspire them and how they see their work reflecting the current situation in Greece.”

Alexis Stamatis says: “The Crisis is a unique condition which can give birth to important oeuvres – and has already done so on several occasions. It has given birth to some very exciting voices, especially as far as our contemporary Greek literature and theatre is concerned. These voices, however, are silenced in Greece today, without support and funding. I do wish that someday we Greek artists will be given the same opportunity and status that we deserve to speak with our artistic voices about the current “Greek wave” in both theatre and literature in our own country. That’s why I am coming to the UK to participate in this very important event, which gives a platform to contemporary Greek artists.”

The day opens with Greek Fictions (2:30pm) in classical style, with Bettany Hughes talking about Helen of Troy and the relevance of ancient Greeks to us today. Star Greek poet (and translator of Sylvia Plath) Katerina Iliopoulou and her stellar friends Dionysis Kapsalis and Vassilis Amanatidis perform and discuss contemporary Greek poetry. Then Victoria Hislop, whose ‘Greek novels’ The Island and The Thread have sold millions around the world, talks about modern Greek literature and the challenges facing writers in a country where publishing and bookselling have collapsed. She’s joined by top Greek novelists Ioanna Karystiani (Back to Delphi), Alexis Stamatis (Bar Flaubert) and translator extraordinaire David Connolly.
In the afternoon, outgoing BBC correspondent (incoming Channel 4 Arts Editor) and Greece aficionado, Paul Mason, the author of two books about the global economic crisis and the global protests (Meltdown and Why It’s Still Kicking Off Everywhere), chairs a provocative debate in Media Myths (5:30pm), about the Greek crisis and the role of the media. Together with journalist Maria Margaronis and journalist and broadcaster Theodora Oikonomides, he discusses: the truth about the Greek ‘meltdown’; media myths and manipulation in a crisis; the role alternative media play when mainstream media stop functioning, and, what happens next for Greece?

In the evening, Greece’s funniest, most famous female stand-up comic Katerina Vrana will take the stage to host Katerina’s Krisis Kabaret (8:00pm), a night of Greek comedy, theatre, music and literature (in English!). The stellar line-up includes poetry-reading from Victoria Hislop and Katerina Iliopoulou; music from Pavlos Melas and his band; live graphic drawing from David Prudhomme; actors Eva Simatou and Nikos Poursanidis in a new one-act play by Alexis Stamatis, plus a Greek-style rendering of ‘Grease is the Word’…

For ticket information about selected events viewers can log on to www.southbankcentre.co.uk

Southbank Centre is the UK’s largest arts centre, occupying a 21-acre site that sits at the heart of London’s most vibrant cultural quarter on the South Bank of the Thames. The site has an extraordinary creative and architectural history stretching back to the 1951 Festival of Britain. Southbank Centre is home to the Royal Festival Hall, Queen Elizabeth Hall, Purcell Room and Hayward Gallery as well as The Saison Poetry Library and the Arts Council Collection. The Royal Festival Hall reopened in June 2007 following a major refurbishment and redevelopment of the surrounding area and facilities.